Explaining his endorsement of the current White House occupant on the administration’s infrastructure spending, healthcare reform, an

[1]d position on abortion, Florida’s former Republican Governor Charlie Crist endorsed him on the eve of the 2012 Republican National Convention in Tampa.

Crist has betrayed American taxpayers before. : He supported the $787 billion “stimulus” boondoggle, which did little to fund shovel ready infrastructure projects but went a long way towards rewarding big “progressive” 2008 presidential campaign bundlers who “just happened” to run “green energy” companies with lucrative loan guarantees and grants.:  It also bailed out state and local governments guilty of practicing irresponsible fiscal policies for decades, especially where spending on government sector union contracts was concerned.:  It was no accident that the lion’s share of “stimulus” spending “just happened” to have gone to “blue states”.: :  Crist’s decision to support the highly partisan, pork stuffed “stimulus” bill helped get the monstrous waste of money through Congress.

“Moderate Republican” go-along to get-along me-first career politicians who, like Crist are so willing to compromise with the institutionalized “progressive” left cannot be trusted.

Conservative Tea Party Americans like Allen West, Marco Rubio, Jim DeMint, Pat Toomy, Rand Paul, Ron Johnson Michele Bachmann, Ted Cruz and Mike Lee have the guts to stand against the institutionalized “progressive” left.:  They have the willingness, backbone and fortitude to preserve individual liberties, restore the U.S. Constitution, and a return to constitutionally limited government, a balanced budget, equal opportunity and equal protection under the law for all Americans. 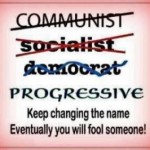 [2]“extreme”.:  Since when are protecting individual liberties, following the U.S. Constitution, having constitutionally limited government and a balanced budget extreme?

The Tea Party’s positions are extreme only when seen as standing in the way of establishing an all-powerful, centrally planned big government controlled by a self-appointed oligarchy of self-imagined “intellectual elites” i.e. a Communist state.

The institutionalized “progressive” left in 2012 America is acting exactly like every other Communist power grab in history.:  They lie, cheat and steal to win elections.:  Then they will lie, cheat, steal and kill to consolidate and strengthen their grip on unrestrained power.

The institutionalized “progressive” left complains about how “extreme” Tea Party Republicans refuse to compromise.:  The Tea Party knows that Communists have no interest in compromising with anyone.:  The institutionalized “progressive” left’s negotiating position has been, is, and will continue to be: What’s Yours is Negotiable, What’s Mine is Not.:  Those who hold this negotiating position, when they do finally obtain an iron grip on unrestrained power, do not compromise with their political opposition.:  They eliminate them…permanently.

[3]America is at an historic crossroads.:  The 2012 election will determine what life in America will be like for the next and following generations.

In the words of Ronald W. Reagan, 40th President of the United States of America:

“Freedom is never more than one generation away from extinction. We didn’t pass it to our children in the bloodstream. It must be fought for, protected, and handed on for them to do the same, or one day we will spend our sunset years telling our children and our children’s children what it was once like in the United States where men were free.”