One of my favorite legal minds[1] out there is Rep. Trey Gowdy from South Carolina. He ripped into the biased 9th Circuit Court of Appeal’s unconstitutional ruling against President Trump’s ban on refugees from seven predominately Muslim Middle Eastern countries. It is a temporary travel ban. Gowdy was blunt and exactly right: “There is no right to come to this country for non-citizens…”

Trey Gowdy is a former federal prosecutor and is legendary. He chairs the House Subcommittee on Crime, Terrorism, Homeland Security and Investigations. He released a stinging retribution of the 9th Circuit’s ruling in a statement late yesterday. He absolutely burned the ruling: “No one familiar with the 9th Circuit Court of Appeals should be surprised at today’s ruling. The 9th Circuit has a well-earned reputation for being presumptively reversible.” The reasoning of the court was politically motivated and exceedingly unconstitutional. 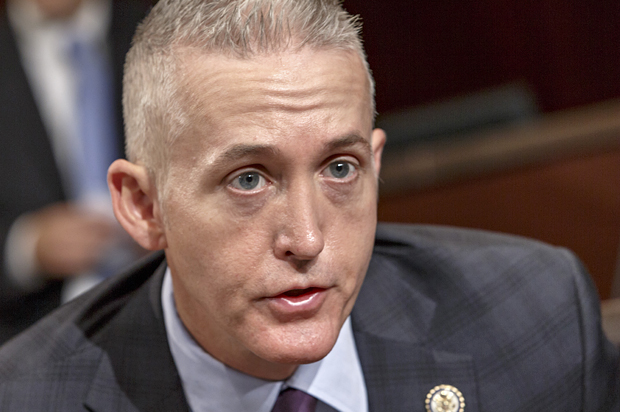 “No one familiar with the 9th Circuit Court of Appeals should be surprised at today’s ruling. The 9th Circuit has a well-earned reputation for being presumptively reversible. Unlike the district court order, there is at least a court opinion which can be evaluated.

Of particular interest is the 9th Circuit Court of Appeals’ suggestion that even those unlawfully present in the country have certain due process rights with respect to immigration. The Court cites Zadvydas v. Davis, 533 U.S. 678, 695 (2001) for the proposition that even aliens who have committed and been convicted of certain crimes while in the U.S. unlawfully may have due process rights with respect to travel to or from the United States. In addition, the Court ventures curiously into its own role in reviewing a President’s national security conclusions.

Legal permanent residents, non-citizens with current valid visas, non-citizens with expired visas (which were once valid), aliens with no legal standing, aliens who have committed a crime but have not yet been deported and aliens who are not even present in the United States but seek to come are just a few of the categories the Supreme Court will need to determine what process is due, if any. It seems clear to most of us – not on the 9th Circuit Court of Appeals – there is no right to come to this country for non-citizens of the United States. It also seems clear judges are neither in a position, practically or jurisprudentially, to second guess national security determinations made by the Commander in Chief. There is a reason we elect the Commander in Chief and do not elect federal judges.

For those, like Alexander Hamilton, who once or now wondered if the Judicial Branch would be too weak. Wonder no more.”

Now, President Trump will either[4] take this fight all the way to the Supreme Court, or more likely, rescind and reissue. Either way, the liberals won’t like it and they will lose. The rulings of the 9th Circuit Court are reversed a staggering 80% of the time. So, it is almost a foregone conclusion this ruling will be reversed as well. This is a move that Presidents have complete legal standing in… Obama, Bush, Clinton and Reagan all did similar bans. This flaunts the rule of law and looks to nullify the power of the executive branch.

In matters of national security, judges should not have the power to overrule the President this way. Trey Gowdy nailed the heart of the matter in his statement and did it eloquently. The 9th Circuit tried to use ‘due process’ as cover for their decision. President Trump also went after the legal reasoning of the judges, pointing out that they did not even once reference the relevant statute at issue in the case.

Gowdy has a sharp wit that can cut an opponent to pieces in seconds. It shows in his statement. The final line was epic. It makes it apparent that these leftist judges who have been stacked in our courts have gone rogue and must be stopped for the nation’s sake. The Trump administration is weighing its next move, which could either be to request an “en banc” hearing at the 9th Circuit Court, increasing the number of judges on the panel from three to 10, to appeal the decision to the Supreme Court or to rewrite the executive order to further clarify its scope.