Five more Syrians have been detained[1] in Laredo on Texas’ border with Mexico. That makes thirteen this week alone. DHS says no derogatory information was found about these people in their databases. I’m sure that’s true as they have NO information on these people whatsoever. Vetting them will be impossible. They have been relocated to an ICE facility for processing and placement. In other words, they will put them somewhere in America that no one knows about. For all we know, they could be members of ISIS and we just let them come on in. Fantastic. This is not going to end well folks and it won’t take long for it to literally blow up in our faces. 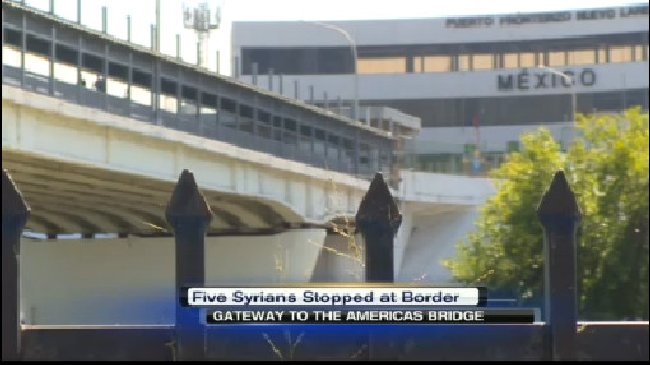 Five more Syrians have been stopped at a Laredo port of entry on Friday. This brings the total number of Syrians seeking to enter the US through our city this week up to 13.

According to a statement from the Department of Homeland Security, five Syrian nationals presented themselves at the Gateway to the Americas Bridge. A family consisting of a man, woman and child, and two other men were taken into custody by Customs and Border Protection — a standard procedure.

The statement reads that CBP “checked their identities against numerous law enforcement and national security related databases. Records checks revealed no derogatory information about the individuals. CBP turned them over to U.S. Immigration and Customs Enforcement for further processing and placement in an ICE facility.”

As you may recall, a group of eight Syrians were also taken by CBP at a Laredo port of entry on Tuesday.

People shouldn’t be just asking themselves how many have been caught at the border… they should be wondering how many have gotten through already. Who is paying for these people to come to Mexico, other countries and the US? Five to seven were also detained at the Arizona border this week and five were caught in Ohio. That’s a very bad sign. The head of the biggest Syrian community in New York says ISIS is already among us. It’s no longer if we get hit, it’s when we get hit now. This is all thanks to Obama’s insane open borders policies and the doubling down on bringing more Syrian refugees into our midst. We aren’t vetting these people at all because we can’t. There is no way to verify where they are from or who they really are. We can’t tell what their true intentions are or if they are radicalized and mean us harm. But Obama is bringing them in by the thousands anyway. Americans are going to get to experience another 9/11 and people will wind up like the French did last week over this. This is an invasion… one Obama is welcoming with open arms. We have to stop this. Our very survival depends on it.