If airlines want to charge by the pound for passengers[1] and their luggage on a private business basis, I have no problem with that. That has to do with space and fuel usage. However, I have a problem with the term ‘fat tax.’ Many of the big airlines out there are now no longer exactly ‘privately’ owned. All are heavily regulated by the Feds and the industry almost looks nationalized these days. Careful where you go with a fat tax. The minute the Progressives bureaucrats succeed in getting it implemented, it will spread everywhere. You could be taxed when you go out to eat, or when you take a train, cab or boat. You could be taxed at hotels and when you shop at retail outlets… all because you are deemed ‘fat.’ This has been the goal all along for Marxists. It’s another way to control the masses and force them to lose weight one way or the other. 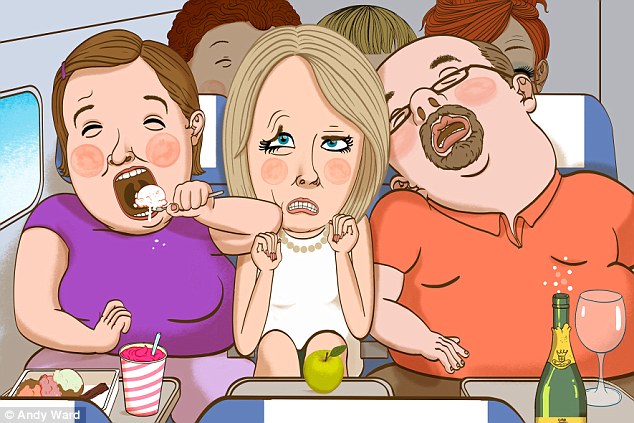 The check-in girl scowls as I try my best to be tactful. You see, these days, when I fly, I’m very particular about where I sit. But it’s not extra legroom or a window I’m after.

I just hate being plonked next to someone who – how shall I put it? – is a little too large for their seat. My request is always met with utter disapproval. Once, I was told not to moan and be grateful I am such a ‘beanpole’.

But as a slim person of 8 st, I am sick of finding myself sitting next to someone more than four times my size on flights. It happens so often, I reckon I’m sized up at check-in as a suitable companion for the clinically obese.

On a recent flight, I was settling in to my seat when, to my horror, a giant of a man plumped himself down next to me. My heart sank.

Worse are the times when I find myself in the middle, squashed between two much larger people: the wafer-thin filling in a human sandwich. When that happens, I try to drink as little as possible during the flight. I’d rather risk dehydration than try to polevault over them to reach the loo.

I used to live in the U.S., where obesity is off the scale. There, the proportion of the population considered overweight is around 50 per cent more than in the UK, so nearly every flight was a misery. You know you’re in for an uncomfortable ride when the arm rests between the seats have to be raised to allow for ‘overspill’.

Once, I was sat next to a woman so enormous I was told to move to a seat behind. I was happy to oblige. But it meant she paid for one seat and got two.

And on another awful 18-hour flight my gargantuan neighbour polished off his meal, drank a bottle of wine, then fell asleep like a dead tree on my shoulder.

The stewardess and I managed to prop him up, but he kept falling back on me. I feared I might suffocate.

She argues that, in the age of the supersize traveller, our total weight (passenger and luggage) should be taken into account at check-in. I couldn’t agree more.

I was livid last year when I was made to pay excess baggage costs because my case was a fraction over the allowance. How could this be fair when the woman behind me – at least 17 st – paid nothing extra because she had a smaller suitcase? What good is travelling light if you’re tipping the scales in the wrong direction?

I don’t mean to be unkind. I hate it when people are bullied for their size. As a skinny person, I’m often subject to cruel remarks, and I understand that being fat can have a genetic component.

But this is pure economics. More weight on-board means aircraft need to take on more fuel. So airlines shouldn’t be criticised for charging by the pound.

Tall people already have to pay for extra legroom. Are they offended? Hardly.

As far as I am concerned, we need to stop being PC and let people take responsibility for themselves.

My friend, Joyce, 49, an air stewardess for an American airline, doesn’t mince her words. ‘Passengers are getting so fat, we’ll soon be able to give up using tray tables and they can just use their stomachs,’ she grumbles.

She’s all for passengers standing on the scales with their luggage at check-in. ‘There should be a weight limit, with charges payable above that. It also means the pilot knows exactly what weight the plane will be carrying, making fuel requirements more accurate.’

In the same way many smokers support the smoking ban, a lot of overweight people support the idea of a flying fat tax. But there is, predictably, much opposition. The trouble is, being obese is now seen as an illness, rather than a condition of our own making.

As Mail columnist Dr Max Pemberton puts it: ‘We are doing with obesity what we have done with alcoholism and drug addiction, which is to remove the individual’s responsibility for the predicament in which he finds himself.’

Another friend, Milly, a size 18, agrees. ‘We all need an incentive to lose weight now and then. If I had to pay more for a seat on a flight, I’d eat more healthily. No one is going to lose weight if the rest of us pretend they don’t have a problem.

‘It would help people to start to take responsibility for their size and make the price of flying so much fairer.’
One airline has already seen sense. In 2013, Samoa Air became the first to introduce a ‘fat tax’.

The airline proudly declares on its website: ‘A world first: ‘The “Samoa Air System” of pay by weight. Pay only for what you weigh! A kilo is a kilo is a kilo!’

Hear, hear! Until other airlines go the same way, I will have to soldier on. But Joyce has a useful tip: ‘If you’re worried about being smothered, bring a couple of hard A4 folders. Wedge them against the arm rest and you have a magic flab barrier.’ I think it’s time I took a trip to the stationer’s.

If a passenger is so large that they take up two seats, they should have to pay for that. It’s economics. But can you imagine paying a fat tax when a loved one dies and they are buried or cremated? That’s coming. How about when you go to the doctor or the dentist? How about enforced diets? If the State gets its way, all of these things will become reality. In fact, if you weigh too much, you could be banned by restaurants and from attending gatherings. Think that’s Orwellian? Well, look around you. We are broke as a nation and these thugs are desperate to find new and better ways to tax us even more and line their pockets as the ship sinks. Yes, there is an obesity problem, but taxation is not the answer. People already don’t want to fly because of security madness… do you really think this would help the airlines? Maybe people can walk. At least they’d lose weight that way.