This echoes the multitude of warnings from Jeff Sessions and Ted Cruz[1]. Obama has been doing it from the beginning and hiding it from jobless Americans. He’s bringing in millions of illegal aliens and getting them work permits. This cements a Marxist voting bloc for Democrats and provides a deep watering hole of cheap, slave labor for the Chamber of Commerce and their Republican cronies. Progressives on both sides of the aisle knew about this and facilitated it. Not out of the shadows, but a permanent shadowy, illegal, corrupt system has been at play via Barack Obama. 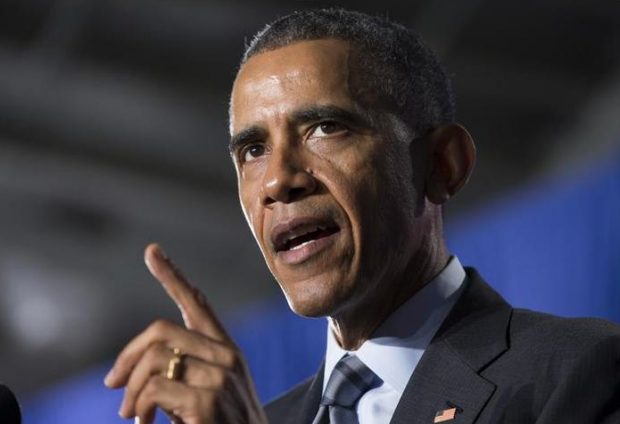 A new study says President Barack Obama has allowed millions of work permits to be given to immigrants who don’t legally qualify to work in the United States. Image: AP Photo/Evan Vucci

The Center for Immigration Studies released a report Monday that said the Obama administration has operated a “shadow” immigration system for years, one that has handed out millions of work permits to illegal aliens and aliens with unknown legal status.

According to government data that CIS received in a Freedom of Information Request, the Obama administration used its discretion to give out nearly 5.5 million work permits to aliens with varying legal status since 2009.

A Republican aide said the report could be one of the biggest scandals of the Obama administration, since it shows the administration was giving work permits to illegal immigrants at a time of high unemployment among Americans.

The report was released just as the Obama administration is preparing to implement an immigration plan that could provide legal protection to up to 5 million illegal immigrants and give them work permits. Republicans have said this plan would only make it easier for non-legal residents to take jobs from Americans, although the CIS data shows this is already happening under Obama.

“I was astonished at the huge number of work permits that are being issued by the Obama administration outside the legal immigration system through executive discretion, especially at a time of high unemployment and stagnant wages,” said Jessica Vaughan, director of policy studies at CIS. “Besides the effect on the American worker, it encourages and rewards more illegal immigration.”

According to CIS[2], U.S. Citizenship and Immigration Services has issued 5,461,568 new work permits to aliens. That’s in addition to the roughly 1.1 million legal immigrants and 700,000 guest workers that the U.S. admits legally each year.

Of that 5.5 million, 1.8 million were issued to aliens with temporary visas, but 1.2 million of that group had a visa status that does not authorize employment.

Another 982,000 work permits were given to illegal immigrants or immigrants who weren’t qualified for admission. Almost all of this group were made up of aliens who crossed the border illegally, according to CIS.

Another group of 1.7 million is made up of aliens with unknown legal status.

“These statistics indicate that the executive branch is operating a huge parallel immigrant work authorization system outside the bounds of the laws and limits written by Congress,” CIS said. “It inevitably reduces job opportunities for Americans.”

The US has been in a prolonged recession, if not an outright depression since Obama came on the scene. Unemployment is falling because everyone has run out of benefits and illegals are padding the employment rolls by the millions. Inflation is stretching most of America to the breaking point on housing, energy and food right now, even though the government claims inflation doesn’t exist. Our wallets know better. This is blatant lawlessness and the leaders we elected better start doing something about it. Now, Obama is bringing millions of Muslim refugees into the country – he is destroying the fabric of the Republic. He’s turning us into a third world nation right before our eyes and eliminating the middle class, ala Cloward and Piven, right on cue. The Light Bringer is enveloping us in the shadows.