Tonight in a rare address from the Oval Office[1], Obama will speak to the nation for only the third time during his reign. Tonight he will say he is addressing terrorism, but primarily, he’ll be going after the guns. He’ll be angling to strip Americans of their constitutional right to bear arms, while implementing a broad Terror Watch List. Listen to how Obama and all of the left are now parroting the meme, “Weapons of War.” He’ll address stripping the rights of those on the ‘no-fly list.’ A list that is notoriously flawed, with 40% or more of the individuals being on it erroneously. He wants to expand that into a new and improved list that could virtually be used as an enemies list and probably will be. No one on that list has yet committed a crime, so to preemptively strip them of their Second Amendment rights is nothing short of fascist. 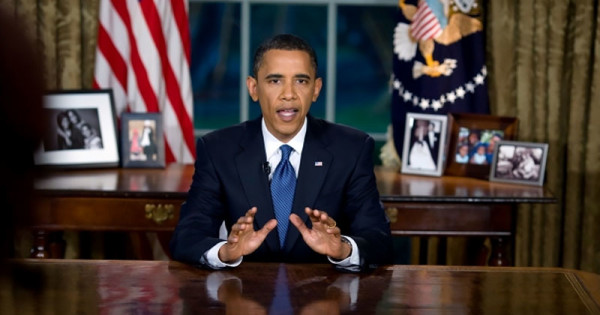 Tonight, President Barack Obama is going to attempt a common magic trick in an attempt to make the Constitutional rights of all Americans disappear[3]:

“We know that the killers in San Bernardino used military-style assault weapons — weapons of war — to kill as many people as they could,” the president said in a video released Saturday. “It’s another tragic reminder that here in America it’s way too easy for dangerous people to get their hands on a gun.”

He called on Congress to close the loophole, saying that while the nation may not be able to prevent every tragedy, “at a bare minimum, we shouldn’t be making it so easy for potential terrorists or criminals to get their hands on a gun that they could use against Americans.”

Obama is addressing the nation tonight, and you’re going to see him attempt to say one thing, and do another.

Obama is going to claim that he wants to summarily strip the constitutional rights of Americans citizens and resident aliens on the “no fly” list without due process, in clear violation of the Constitution. He does not have evidence that anyone on this list is about to commit a crime, or the FBI would arrest them. Instead, he’s asking to “Minority Report” them, and strip them of their liberties because they might one day commit crimes.

But it’s even worse that it seems.

In public, Obama is speaking the words “no-fly” list, but what Democrats are actually pushing is legislation stripping the rights of citizens in a much larger and broader group, in which you can find yourself at any time for any reason, or not reason at all. This much larger list that is the subject of Democrat legislation is the so-called “terror watch list.”

You can find yourself on the terror watch list for merely knowing, living near, or working with someone that has shown up on either the no-fly or terror watch lists, or for much more mundane activities, such as mistakenly using an expired credit card attempting to book a flight.

You can find yourself on the terror watch list if you say or watch something that someone in the Obama Administration doesn’t like, as I did in January of 2013 for pointing out that our power grid is a soft target for terrorism, or numerous other journalists have from writing articles critical of Barack Obama.

There are a million people on this utterly arbitrary terror watch list, and 40% of them have no ties of any kind to terrorist groups. Obama’s government has arbitrary added roughly 300,000 people to this list for no reason whatsoever, and now wants to use this enemies list to strip the rights of American citizens that he doesn’t like.

He’s claiming that he wants to keep us safe from terrorism.

What he’s actually doing is attempting to create a “enemies list” loophole where he and his allies can arbitrarily suspend your constitutional rights without due process if he doesn’t like what you say, whom you associate with, or whom you support politically, as he did to many supporters of the Tea Party prior to the 2012 elections.

Obama has used the IRS, FBI, and EPA against American citizens before, and wants to expand his reach.

Obama is addressing the nation tonight to beg you to give him fascist powers.

Germany was blind enough to give these powers to an elected leader in the 1930s.

My fellow Americans, we now know what that looks like. Let’s not repeat their mistakes and give up our liberties to a power-mad fraud of a President.

It is blatantly obvious that Obama is using the terrorist attack in California last week to push gun control and confiscation. Anyone could wind up on the Democrat’s Terror Watch List for almost any reason. If you say something that they don’t like or act in a way that they find objectionable, you could find yourself on that list and stripped of your rights. Obama is expanding his powers and asking for the blessing of the American people just as Hitler did from the Germans. Obama’s address may contain a number of regulatory changes proposed by the gun-control group Everytown For Gun Safety, a national organization founded by former New York City Mayor Michael Bloomberg. The proposed new regulations include[4]:

How do you think people will react with the prospect of being arrested if they fail a background check? A subjective background check that can be falsified and you have no control over it. A massive black market would come into being for guns in this country. This isn’t the free America I grew up in and Obama has to be prevented from implementing this.