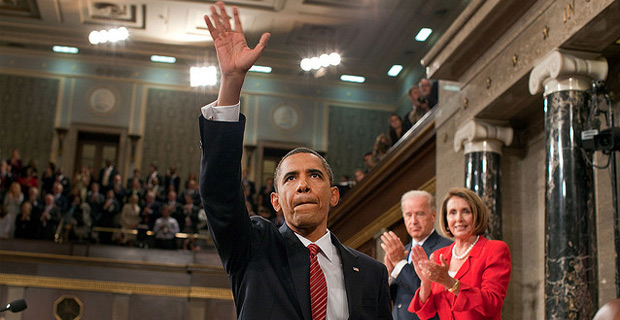 If you had any doubts whatsoever that the whole border crisis was planned, this should fix that[2]. Obama and Biden will meet with Central American leaders[3] next week at the White House to discuss promoting legal, orderly migration. In essence, they will discuss the eradication of our borders, the end of American sovereignty and the furtherance of a collaborative, communist plan to redistribute wealth, people, assets and to create, in the end, a North American Union.

America, you have been betrayed by your leaders and your country is in the final stages of a destructive conspiracy that benefits a few elitist Marxists and destroys your liberty forever. How’s that hope and change working for you now?

For decades, US corrupt officials have sent billions to Central and South America to line the pockets of corrupt officials there. The thought was that it would placate them and keep them from attacking us, but that only makes your enemies hate you more. Virtually every country there is now ruled by a Communist and/or dictator. We have declared the Monroe Doctrine dead and now Russia[4], China and Iran are moving into our backyard en force.

For those who missed what the Monroe Doctrine was all about, it was basically a declaration that those Latin-American nations which had declared themselves independent should be free from European interference and aggressive colonization. America had only recently achieved her own independence and considered “any attempt on their part to extend their system to any portion of this hemisphere as dangerous to our peace and safety.” Declaring the Monroe Doctrine “dead” basically says, “we no longer care about our national security, so we invite our aggressively colonial buddies — communist and otherwise — to subvert and conquer our Southern neighbors.”

Instead of fighting back against an ever growing terrorist threat, Obama and Biden are enabling them by actively recruiting a precursory invasion force of so-called children in the 10’s of thousands to come across our border, using American’s heart strings as a garrote to strangle us with. Obama is then shipping them to every corner of the country and then the real invasion comes when the families follow by the millions, changing the voting demographic in America once and for all, ensuring Marxist control no matter what happens here. Obama has three years left to finish the destruction of America and it is right on schedule. Now, he goes to meet leaders who have signed agreements to fast-track this atrocity. Faster, faster pussycat… kill.

(The Hill[6]) —President Obama and Vice President Biden will meet with the presidents of Guatemala, Honduras and El Salvador on July 25, the White House announced on Friday.

Obama and Biden will meet with President Otto Pérez Molina of Guatemala, President Salvador SÃ¡nchez Cerén of El Salvador and President Juan HernÃ¡ndez of Honduras, to discuss the recent surge of migrants across the U.S. border.

In the meeting, the leaders will discuss how the governments are “cooperating to promote safe, legal, and orderly migration” between the countries “in a spirit of shared responsibility” including “with respect to the return of family units,” a process which began this week for the three Central American countries, according to the White House.

The meeting is also expected to include discussions on how the countries can work together to bolster economic growth and development along with security in the central American region as well as address the “factors” that are causing the migrants to attempt to cross the border.

Everything about this incursion reeks of evil. Obama is directly involved in human trafficking, the heartless deaths of who knows how many children, rape, murder, the importation of deadly infectious diseases, gangs, drugs and weapons and the furtherance of the spread of poverty and misery throughout the United States. Obama hates America and wants her brought to her colonial knees. This is his gift to us – the gift of death, destruction and slavery.

From The Camp of the Saints[7] comes a timely reminder of Article IV, Section IV of the Constitution:

The United States shall guarantee to every State in this Union a Republican Form of Government, and shall protect each of them against Invasion; and on Application of the Legislature, or of the Executive (when the Legislature cannot be convened) against domestic Violence.

He goes on to make some great points in his post — here is one from James Madison, speaking[8] before the Virginia Ratifying Convention on June 6, 1788:

[W]ithout a general controlling power to call forth the strength of the Union to repel invasions, the country might be overrun and conquered by foreign enemies.

America has knowingly elected the ultimate Enemy from Within[9]. It’s no longer a question of his true intentions, it is the President’s sworn duty to protect us from enemies foreign and domestic. Instead, he has invited them in and actively aided and abetted them in attacking America. It is treason and Obama needs to be impeached for his High Crimes And Misdemeanors. The fact that we have not sufficiently stood up against Obama and faced his Marxist machinations head on is a very bad sign indeed. It shows complacency and apathy and a country who is submissively baring her throat to the blades of her enemies.

Over 57,000 minors have arrived[10] and by year’s end, it will be 90,000. Double that for next year. I actually think these numbers are low-balled and that there are many more, but since the government keeps covering it up, we just don’t know. The fact that our government claims[11] this meeting is to deter these countries from sending even more is a bald faced lie. These countries have already signed an agreement with Mexico to speed up more arrivals here in the US. Obama is saying one thing in the press and doing the opposite in his meetings with these tyrants. It’s an “ongoing collaboration” alright – a very treasonous one.

I especially found this quote of interest[12]:

The statement from the White House said the leaders would also discuss how to address the underlying issues of poverty and security in the region that prompt Central Americans to leave their countries.

Read between the lines here. They are speaking about wealth redistribution and a Marxist form of security that is bound to be bad news for America in the extreme.

The lap dog media[13] is spouting lies left and right, contending that the numbers of invaders is dropping off significantly (and, shockingly, all their stories appear to have a single-template origin). I flat out don’t believe that and I don’t think anyone else does either. Out of one side of their mouths they talk about stemming the flow and not allowing illegal immigrants in; out of the other they are cutting deals with the leaders of Guatemala, El Salvador and Honduras. These countries, by the way, are now calling for a mini-Marshall plan[14]:

(Reuters) – Honduran officials on Wednesday called for U.S. aid to Central America to reduce violence that has fueled a surge of child migration to the United States, with the foreign minister calling for a “mini-Marshall plan” to attack the broader underlying problems.

Honduran President Juan Hernandez said Washington should help Guatemala, El Salvador and Honduras fight gangs with a plan similar to U.S. anti-drug programs in Colombia and Mexico, as well as funds to lift growth in the impoverished region.

“One has to recognize that our countries can’t do it alone,” he said at a conference about the unaccompanied minors fleeing for the United States. “We need help from the United States, from Mexico, because this is everyone’s problem.”

Honduran Foreign Minister Mireya Aguero told the conference efforts to step up security at the U.S. border were not working and that U.S. aid would be better spent in Central America.

“It’s much more practical for the United States to launch a mini-Marshall plan, as they did after World War Two, to create opportunities and really get to the root of the problem in Central American countries that is fueling migration,” she said.

Simon Henshaw, the U.S. principal deputy assistant secretary of state for population, refugees and migration, said that the economic situation in Central America should be addressed with the help of international and regional development banks.

“It’s clear, however, that it requires the best efforts by all stakeholders,” said Henshaw, speaking alongside Aguero and the foreign ministers of Guatemala and El Salvador. “That means better political will from all countries.”

So, some of the security they are ranting about involves more money from the US – wealth redistribution through taxes and aid. None of this so-called aid has worked in Central and South America before. It won’t work now, unless of course you count the fact that it will definitely further bankrupt and weaken the US. Eventually, I believe, Obama will ratchet this up to the point of calling in the UN for assistance on our border, which was the plan all along. You can see the posturing has begun already:

A local U.N. official who also spoke at the conference in Honduras said that U.N. Secretary-General Ban Ki-moon is “deeply concerned” about the child migrants. He urged the governments involved “to urgently protect the human rights of migrant children.”

You don’t need a crystal ball to see where this is heading folks. You really don’t. Don’t forget[15], Obama has his pen and phone at the ready as well:

Aides said the talks were arranged in the last 10 days, as the crisis drew international attention and protests erupted in several cities where busloads of children were arriving.

Mr. Biden traveled to Central America to meet with the three presidents in June, but officials said that Mr. Obama decided that the border issue was too complicated and too important to leave to long-distance diplomacy. The meeting in Washington, they said, was intended in part to pressure Congress to pass the funding and legal changes that the president wants.

Americans are not stupid. That is why there were protests in over 319 cities this weekend against a manufactured border crisis. While Obama and the leaders of these countries blame violence as the cause, it just isn’t so. These countries have always been violent. The invasion didn’t just ‘spontaneously’ occur. It has long been in the making. It is an orchestrated invasion with the goal of eradicating our borders and changing the voting demographic in conservative areas of the country. What you are seeing is a new variation on the Cloward-and-Piven gambit — overwhelm the system(s) and harvest the ensuing collapse — which, in turn, is right in line with Marx’s overthrow-of-Capitalism doctrine which advocates the use of force and subterfuge to seize all wealth, eradicate prosperity and place it in the hands of self-appointed elites, all while declaring that it’s for the “people” don’tcha know.

This is straight up radicalist doctrine and America must stop Obama from delivering the final death blows to the Republic. Impeach Obama and his cohorts, or the Republic will not survive.