Scalise On A Mission! Vegas And My Experience Have ‘Fortified’ My Position On 2nd Amendment [VIDEO]

House Majority Whip Steve Scalise (R-LA) is back from recuperating from being shot by a leftist who tried to take out Republican Freedom Caucus members at a GOP baseball practice over the summer. It’s taken months for him to return… he nearly lost his life. Now, he’s saying his brush with death and the mass shooting in Las Vegas has strengthened his views against gun control. That-a-boy. The cold hard truth is two armed officers protected those GOP members from being slaughtered that day. As for Vegas, the Second Amendment really had nothing to do with it. The shooter had 23 guns in the room with him and explosives in his car and at his homes. One way or another, he would have given the Grim Reaper a run for his money.

Fox News’ Martha MacCallum interviewed Scalise and he stated his views on gun control very succinctly. When asked if his experience and the deadly mass shooting in Las Vegas on Sunday night have changed his views about the Constitution’s Second Amendment, he said, “I think it’s fortified it.” He’s not alone. Scalise’s comments echo those of other congressional Republicans and the White House. He also stated that lawmakers should focus on supporting victims and law enforcement before advocating for a legislative response. 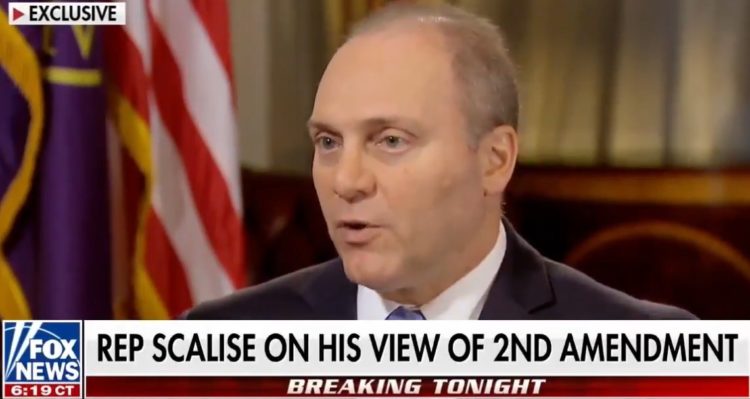 “Because first of all you’ve got to recognize that when there’s a tragedy like this, the first thing we should be thinking about is praying for the people who were injured and doing whatever we can to help them, to help law enforcement. We shouldn’t first be thinking of promoting our political agenda,” Scalise said. Exactly right… quick, send the memo to Jimmy Kimmel and Hollywood. Scalise’s support for gun rights has earned him an A-plus rating from the NRA. The bills he has supported over the years would ease interstate gun sales and ensure national reciprocity for concealed-carry permit holders. Respect.

James T. Hodgkinson, a supporter of commie Sen. Bernie Sanders (I-VT), who wrote critical Facebook messages about Republicans, shot Scalise, a member of his Capitol Police security detail, a Tyson Foods lobbyist and a staffer for Rep. Roger Williams (R-TX) at the GOP practice for the Congressional Baseball Game on June 14th in Northern Virginia. The bullet went into Scalise’s hip and ricocheted around his pelvis, shattering bones and damaging internal workings. He had multiple surgeries to save his life. He’s still in rehabilitation and will be for some time, but he lived through it.

Scalise returned to the House last week to cheers and applause by those in Congress. After the mass shooting in Las Vegas on Sunday, Scalise urged people to donate blood to help victims. The shooting was the deadliest in modern US history, with 59 deaths and 527 injured. A 64 year-old man named Paddock did the dirty work and now the authorities are trying ascertain if he was radicalized. ISIS has taken credit for the slaughter multiple times.

“In this tragic moment, I encourage people across America to stand together in solidarity, and to support the Las Vegas community and all of those affected, especially by giving blood and encouraging others to do the same. In the face of unspeakable evil, our whole nation must respond with countless acts of kindness, warmth and generosity,” Scalise said in a statement. His continued support for gun rights stands in contrast to former Rep. Gabrielle Giffords (D-AZ), who was shot in the head at a constituent event in 2011 and has since become a prominent advocate for gun-control reforms. Good for Scalise.