The 14th Amendment to the U.S. Constitution reads in part:

The 14th Amendment has been grossly and purposely misinterpreted over time… thus we now have anchor babies and the granting of automatic citizenship to children of illegal alien mothers. This was never the original intent. Normally, Slate is one of those media outlets I steadfastly ignore because of their leftist leanings. However, Reihan Salam gets it right when he contends we should end automatic birthright citizenship[1]. 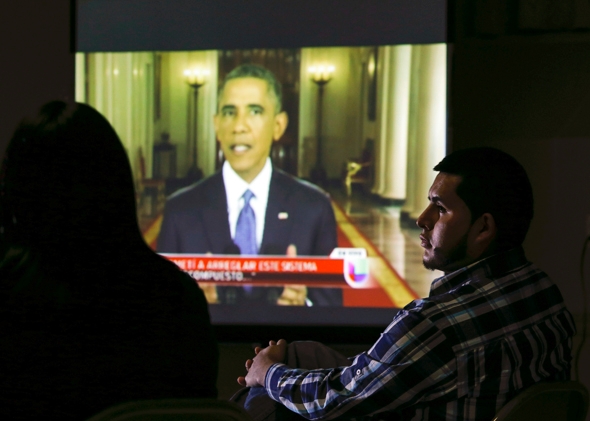 Reuters: A group of legal and unauthorized immigrants watch President Obama speak about immigration policy from the White House, on a screen in New Brunswick, New Jersey, on Nov. 20, 2014.

Whether you agree or disagree with President Obama’s use of his executive authority to temporarily shield 3.8 million unauthorized immigrants[3] from the threat of deportation (on top of the 1.5 million he shielded in 2012), this much is true: The Obama administration has permanently altered the immigration debate. The president and his lawyers are right to insist that his executive action has not granted these immigrants “legal status.” Rather, it allows unauthorized immigrants to apply for a three-year reprieve from removal, which comes with a work permit. Though many conservatives, myself included, have questioned the wisdom of this unilateral action, the executive branch is very powerful in our constitutional scheme, and I don’t doubt that his actions will be vindicated by the courts. So no, I don’t intend to quibble over whether the president had the right to take this step. But I do want to discuss what happens next.

To demonstrate our seriousness on this front, we should take a step that countries like Australia, Britain, France, Ireland, and New Zealand have already taken: We should end automatic birthright citizenship[4]. If it is wrong to tear families apart by deporting the parents of U.S. citizens—and it really is wrong, in case you were wondering—we ought to establish that only the children of those who are living in the United States as citizens or lawful permanent residents will be granted citizenship at birth.

While I do not agree with every point the author makes, his premise is correct in that the practice of anyone being born on American soil, even to an illegal alien, should get citizenship, needs to be rectified and halted. Where we diverge in our opinions is that I believe we are fully capable of mass deportation and I do not believe that the President’s actions have any merit whatsoever. If you did not come here legally, as my son-in-law did from Denmark, you pack your bags and go. You can come back when you do it the right way. End of story – follow the law. And no free ride for giving birth to an anchor baby. It is a tool of infiltration, manipulation and conquest and should not be allowed.

Read the rest of the article here[5].