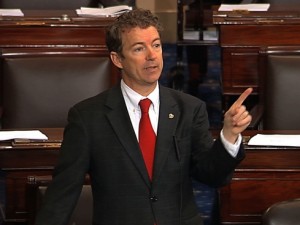 [1]John McCain (R, AZ) and Lindsey Graham (R, SC) criticized him, saying Paul was doing a “disservice” to the debate about drones.

When was the last time either McCain or Graham raised concerns over the White House’s use of drones?

“I don’t think what happened yesterday was helpful to the American people…What we saw yesterday is going to give ammunition to those who say the rules of the Senate are being abused,” McCain said.

Since when is proper use of the Senate filibuster abuse?:  McCain seems more concerned with getting along with “progressives” in the Senate than preserving the United States Constitution.

Paul was attempting to get the Obama administration to confirm it will not kill non-combatant Americans within the United States.:  Graham apparently viewed that as a farcical question.

“I do not believe that question deserves an answer,” Graham stated.

What question would Graham consider worthy of reply?:  Do assurances from the DOJ that they will not selectively ignore constitutionally protected rights of American Citizens to judicial due process not qualify?

Concerns over the administration’s drone program led lawmakers to question Attorney General Eric Holder about legal justification for targeting American Citizens.: :  Similar concerns prompted Paul to begin his filibuster, demanding answers from the White House.:  Paul said he would relent only if the Obama administration stated publically that it will not target Americans on American soil.

The administration apparently believed it could kill Americans it suspected of having terrorist ties without putting them on trial.

Concerns over protection of due process for American Citizens are bipartisan.

“You can hear almost unanimous concern about transparency and wrestling with how to move forward here in a way that protects both our constitutional liberties and our security as a nation,” Senator Christopher A. Coons (D, DE) told Holder.

Under careful examination by Senator Ted Cruz (R, TX), Holder repeatedly stated U.S Citizens on American soil were not “appropriate” targets for executions without due judicial process.:  Cruz said that was an insufficient answer.:  “You keep saying ‘appropriate.’ My question isn’t about propriety. My question is about whether something is constitutional or not,” said Cruz.

McCain and Graham aside, Rand Paul, Christopher Coons and Ted Cruz are on the right side of the debate.

Since McCain and Graham apparently believe it is most important for them to get along with “progressives”, no matter the cost to the Rights of American Citizens at home, their criticism of Paul is out of hand.

Let them face the repercussions in their next election.