Why The Tea Party Matters

Tea Party principles are based on a belief in the U.S. Constitution.:  Across America, a huge natural constituency exists for the bread-and-butter American issues of lower taxes, reduced government, a strong national defense, secure borders and a return to the traditional American values of: E Pluribus Unum, Liberty and in God we trust. 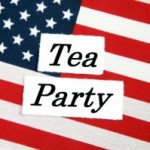 [1]E Pluribus Unum means from many, one. It does not mean unquestioning acquiescence to multiculturalism and diversity.:  Liberty means opportunity for all, not equality of results.:  In God we trust means reliance upon the Creator of all things.:  It does not mean passive acceptance of secularism, atheism or submissive surrender to “progressive” statist mandates.

The Tea Party movement began as a peaceful protest against big government, reckless government spending, high taxes and oppressive regulations. The Tea Party’s Contract From America expressed principles held by its members. The most basic being that “Our moral, political, and economic liberties are inherent, not granted by our government.” 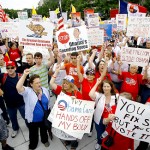 [2]The American idea, the shot heard round the world, is that We The People can govern ourselves.:  By the Laws of Nature and of Nature’s God we are entitled, by virtue of our humanity, to the maximum amount of Individual Liberties consistent with law and order, and to the Right of private ownership, not the least of which is the Right to own and decide for ourselves.:  These Liberties and Rights are to be equally protected by a Constitutionally limited, representative government that derives its just powers from the consent of the governed.:  This is a distinctly exceptional American idea.

These are the Tea Party’s principles, which today are largely viewed as being Conservative or “right wing”.:  Adherence to these principles are shared by members of many political Parties, but rejected wholesale by the institutionalized “progressive” left movement, which has co-opted today’s Democratic Party.

If you are in the Tea Party, you believe in America.

If you believe in America, you belong in the Tea Party.

In an election where a decision will made between the American way of life and a nanny state “entitlement” society based on a European idea, the Tea Party Matters.