Beloit, Wisconsin needs a new Chief of Police – yesterday. This guy is a fascist whackadoodle. Let’s see… when was the last time EVER that you just had handguns lying around that you couldn’t find and need help locating? Hmmm. If you’ve got renters or roommates with guns, that does not make them a criminal. As far as comparing guns to Ebola and putting forth a forfeiture of your Constitutional rights and a voluntary search and seizure as being equal to a vaccine – sounds to me like the cure here is far deadlier than the so-called disease. And what kind of idiot says to the police under such a Progressive local potentate, “Come on in and search my home!” How about instead of thinking up moronic excuses for taking our guns, you actually just do your job?[1] 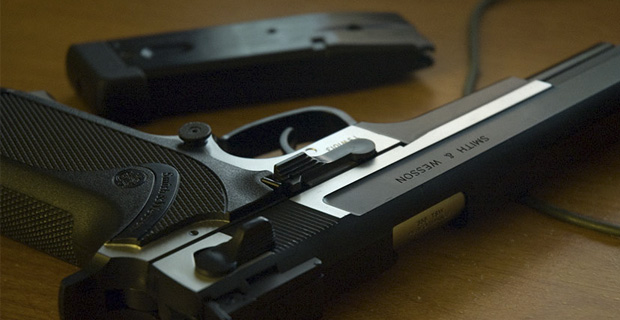 A town in Wisconsin is asking local residents for a favor. The citizens of Beloit, a town located 75 miles southwest of Milwaukee, are being asked to voluntarily give up rights granted to them by the Constitution.

In an effort to ‘get people thinking differently about guns’, Police Chief Norm Jacobs of the Beloit Police Department is asking locals to grant the police department access to their homes[3] so they may search for firearms.

Jacobs admits that he doesn’t believe the citizens of Beloit will be knocking down his door to have their property searched and seized, but states that he hopes this campaign will get younger people to think of gun violence like Ebola. The chief says that he wants local residents to think of home inspections like vaccines that will assist in building up his community’s immune system.”Gun violence is as serious as the Ebola virus is being represented in the media, and we should fight it using the tools that we’ve learned from our health providers,” Chief Jacobs said[4].

Police claim that their request will allow them to locate guns that the homeowner didn’t know they had in their possession. Jacobs even stated that he believes there is a chance they will discover firearms linked to crimes.

“That’s really what we’re looking for,” the Chief said. “Maybe we’ll find a toy gun that’s been altered by a youngster in the house — and we know the tragedies that can occur there on occasion.”

Maybe in the future, instead of coming up with a plan to search for modified Nerf weapons or developing a campaign that compares knives to leprosy, the Chief of Beloit can perform his sworn duty to protect the rights of his neighbors instead of looking for ways to violate them.

To this Police Chief, everyone is a criminal and we are all stupid. No way would I let this man near my kid’s toy guns – he’d accuse them of a crime or find something to charge us with. That goes for my home in general. The only tragedy here is that we have let Progressive Marxists like this guy into positions of power where they can abuse us and our rights. Trust me when I say this is a test… they are seeing if it will bite. The Liberals are just itching to ban and seize our guns any way they can – Constitution be damned.