When we talk about “Big Government”, this is the kind of thing we’re referring to. Not necessarily about the size, but about the scope, the power, the domineering, and the abuse. Andy and Ceil Barrie bought a 10 acre piece of property deep in the heart of the White River National Forest. Legally purchased. Then Government decided to rear their ugly fascist head

(Fox News[1]) Now the county government, alarmed that the couple drives their ATV up a 1.2-mile old mining road to the cabin, wants to take the Barrie’s land – and it’s doing so by claiming eminent domain. Rather than using the practice of government seizure of private property to promote economic development, the county is using it to preserve open space.

The move shocked the Barries. They have allowed hikers to travel through their property, had no plans to develop the land and were negotiating with the county at the time it moved to condemn the property.

Open space “is all it’s ever been,” said Andy Barrie. “I feel like I can’t trust my government.”

Would it surprise you that all three county commissioners[2] are Democrats?

Summit County Attorney Jeff Huntley said the county had to act after the Barries insisted on being able to use motorized transport to get to the cabin. “People in this community are very intent on preserving the back country,” he said.

Act? Only in Liberal World. The US Forest Service said they couldn’t use the ATV to access their property, because they said so. Despite the USFS probably driving around the part in trucks and on ATVs themselves.

The county commissioners voted to condemn the property on Oct. 25, endorsing a staff report that found that “public motorized access” to the property could damage the alpine tundra and streams, as well as habitat for the endangered lynx.

Did I mention that the County Commissioners are Democrats? And what about the government doing the same with motorized vehicles? The Barrie’s paid $550,000 for the property, including the tiny cabin and ATV. This is what it looks like, via The Blaze, which also carries this AP story 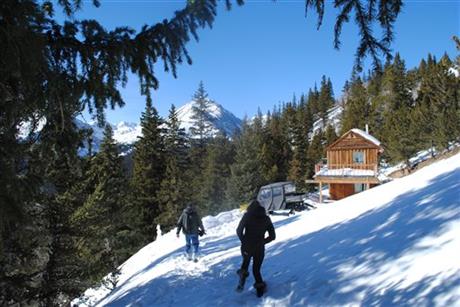 The county also complained that the previous owner had “illegally” added a second story. To a legally owned property. Absolute power corrupts absolutely. Government can seemingly do whatever it wants on a whim, based on their feelings. And screw the Citizens.