Bill Clinton UNDER FIRE For Election Fraud – Next Stop… Prison?

Bill Clinton knowingly went to[1] a voting site to pose with the mayor, kiss old ladies, shake hands and drink coffee. Hillary’s campaign got slapped with a warning reminding them that they are not allowed to sway voters at polling stations. Since Bill Clinton is basically a celebrity and the husband of a current candidate, his presence there obviously does just that and is a violation of campaign laws. There is now a petition calling for his arrest and prosecution over it. First off, I’m not one to defend Clinton, but what he did, did not rise to the level of a crime. Fine him, reprimand him… but come on! We have better and more important things to do than this. 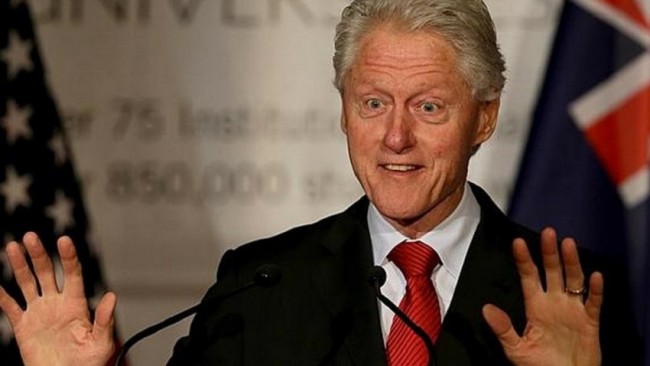 Over 90,000 people have signed a Change.org petition[3]calling for the “ immediate arrest of President Bill Clinton for clear, knowing and egregious violation of the campaign laws to swing an election in a significant way.”

Several Massachusetts voters have come forward claiming the former President Clinton entered polling stations in Newton, New Bedford and Boston on Super Tuesday and another woman posted a photo with him at a West Roxbury polling location that same day, The Boston Globe reports.

A document summarizing the state’s election day rules states, “A person standing within 150 feet of a polling location, including observers in the polling location, may not: hold any campaign sign; hand any person literature intended to influence the voter’s action at the polls; wear any campaign buttons or identifying signage; solicit a person’s vote for or against a candidate or question on the ballot; or, distribute stickers.”

While Clinton was not seen telling voters to vote for his wife, he was videotaped shaking hands and speaking with election workers. The majority of those behind this lame movement are Sanders’ supporters. Yep, he pushed the boundaries of legality here… but if you want to nail Bill, go after his wife. Now, there’s someone who is stone cold guilty of corruption, national security breaches and murder. “We, the undersigned, respectfully ask that you honor the democratic process with all the dignity it deserves, and hold Bill Clinton accountable for the felony of his actions,” the petition concludes. Agreed… but don’t go after the small stuff when there are bigger fish to fry out there. He’s smart enough to walk just this side of the line on legality.