Maxine Waters is certainly a glutton[1] for punishment. Especially when it comes to Tucker Carlson. She called Tucker’s show ‘racist’ because he dared to ask how she could possibly afford to have amassed millions on a government salary. Gee, guess I’m racist too. I’d sure like an answer to that question. She also lives in a home that is worth at least $4.5 million. Again, how did she get soooo filthy rich off her constituents in south central Los Angeles? By the way, she doesn’t live there of course. Too much riff raff – she has gates and walls. What a concept.

The district that Mad Max represents is one of the poorest out there. How do you spell ‘corruption’? She has been elected 14 times and has been in office for nearly 40 years. She is one of the wealthiest members of Congress as well. How dare Tucker Carlson ask where all that came from. Heh. My only question is why haven’t voters been demanding to know as well. Tucker may not be alleging wrongdoing, but I am. 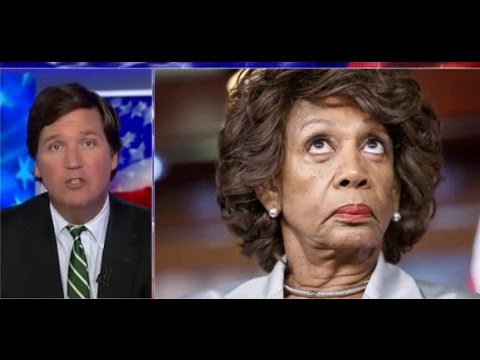 Tucker didn’t mention her skin color or sex when he asked Maxine Waters how she has amassed so much wealth on a lawmaker’s salary. Thinking this was her way of deflecting and avoiding answering the question …

She doesn’t seem overly excited about appearing with Tucker to discuss these concerns. Interesting to listen to him talk about the research they’ve done into Waters, and how even one liberal organization has deemed her one of the most corrupt lawmakers.

Also didn’t know she represents one of the poorest areas in California and doesn’t even actually live there.

Because Tucker couldn’t possibly care about political integrity, no no, he’s asking her because she’s black or something. And she thought that was a smart way to answer?

This has nothing to do whatsoever with race or sex, regardless of what Maxine claims. At least one liberal organization has branded Mad Max as one of the most corrupt politicians out there. Throwing the race or sexism card is deflection, so people won’t look any closer at her finances and how she made her money. I wager that would be very illuminating to say the least.

Tucker revealed that Maxine Waters’ “investments” may be tied to One United Bank. Her husband, Sid Williams, was on the board at that bank when it received a $12 million bailout during the 2008 crash. I find that VERY interesting. “Maybe those are her ‘investments’,” Carlson said, adding that she also paid $600,000 to her daughter from her campaign chest. Yep, and her daughter is being investigated for obtaining some of those donations in a fraudulent manner. No charges yet, but the feds are digging.

Waters owns a number of properties and was furious that Carlson would bring that up… once again using racism as a shield, she said “the way Carlson talked about it is ‘what right does an African-American woman have to do well?'” Bull crap. “He doesn’t know anything about my investments,” she added. And neither does anyone else and that’s the point Maxi.

Maxine Waters​ calls Tucker racist for asking how she got so rich on just a lawmaker's salary. pic.twitter.com/UxfsO13J3G[4]