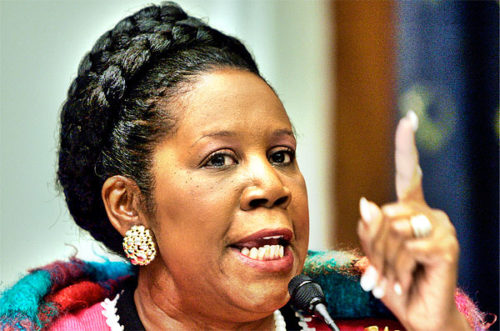 Anyone familiar with Sheila Jackson Lee[2], who is currently the U.S. Representative for Texas’ 18th congressional district, knows that she finds it difficult to put together coherent thought patterns and sentences. How a woman so poorly informed has been elected over and over again since 1995 is a mystery. But she has been. She’s in the news yet again, this time for some inappropriate dealings with regard to the Super Bowl, which was in her home district of Houston this past February.

Here’s the timeline shown by the filings:

Also, Jackson Lee’s Instagram account showed a picture that put her “on location” for the Super Bowl at NRG Stadium. It was described “We are #OnLocationatSB51.”

Now, it’s not clear why Democrat Jackson Lee thinks that spending ten thousand dollars on Super Bowl tickets and parties is a “campaign expense.” But that is exactly what she claimed. Is she trying to get the votes of party goers? Is she talking issues while partying at Grotto? Is she working for the good people of Houston while hanging out at the Super Bowl? All questions she will hopefully have to answer. Her expenses have been noticed and will be questioned.

President of the Foundation for Accountability and Civic Trust, Matthew Whitaker, a Washington, D.C.-based government accountability group, is planning to ask the hard questions.

“We are always concerned and want more information when we see campaign expenditures that are not directly for campaign purposes. Campaign funds should not be used for any thing other than running a campaign. There have been many cases of public officials abusing their campaign funds for personal expenses and for the benefit of others. The public deserves an explanation on why Super Bowl tickets were a campaign expense.”

Jackson Lee is avoiding calls about this issue. And we all know why.