I can’t think of anything much more horrifying[1] or tacky than having the irrelevant Dixie Chicks and Beyonce performing at the Country Music Awards. Unless you are into celebrating racism, cop-hatred and Marxist bloviating. Fans of country music took to social media to showcase their disgust over the whole affair. Right there with ya guys.

The Dixie Chicks claimed it was one of the best weeks of their lives as they groveled before Beyonce. They bragged that they hated the CMA’s and they fulfilled a dream of a lifetime with Beyonce on the CMA’s dime. Just sickening. Beyonce of course made it all about herself. I don’t know what the CMA’s were thinking, but this was a disastrous move and sure as hell didn’t play to their standard audience and demographic. Bet they won’t do that again. 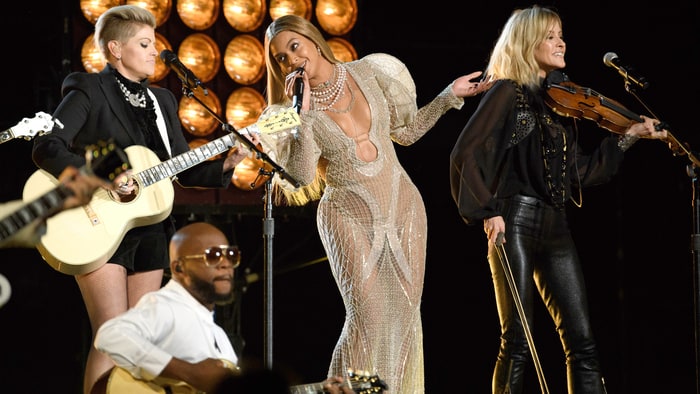 The Dixie Chicks and Beyoncé brought a gasp to the country music world during the 50th Annual CMA Awards.

As previously reported[3] by Independent Journal Review, Beyoncé performing her song, “Daddy’s Lessons,” along with the Chicks was followed by a whole lot of extreme emotions from fans for the CMA’s choice of artists to showcase.

Some were downright disgusted… 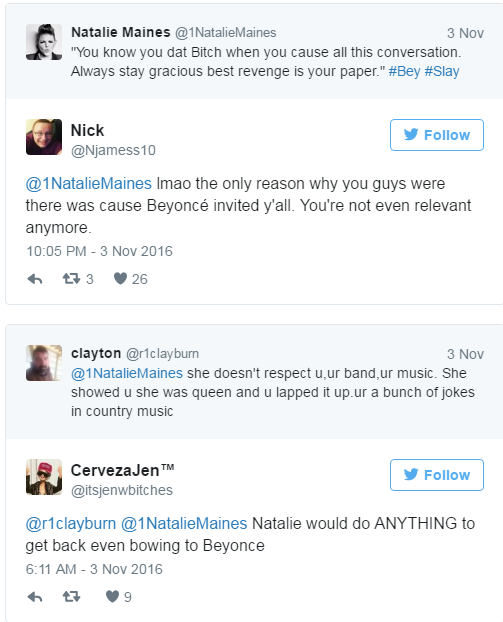 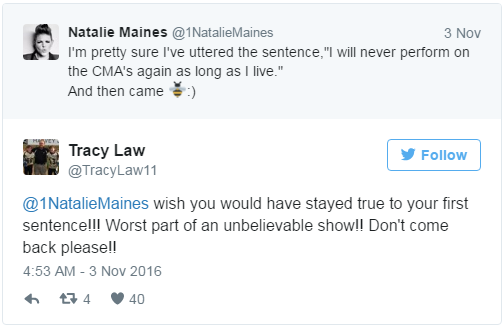 Hopefully, neither of these so-called performers will ever disgrace the stage of the Country Music Awards again. Beyonce is about as country as Hillary is honest. Just sayin’.

I sincerely doubt by the way that the Dixie Chicks were invited back next year. If they were, then the CMA’s are definitely on their way out and will get boycotted much like the NFL is. The Marxist Chicks made it very clear they hated those in their audience and look down on them. I would imagine the sentiment is mutual.

Country music fans are typically pro-police, pro-military and pro-America… all things that Beyonce and the Dixie Chicks are not. What did they think the reaction would be? By the looks on the faces in the audience, people were really ticked off over this and I don’t blame them.

The Dixie Chicks should have just gone off into oblivion after dissing Bush. Beyonce is a radical racist and proud of it. I wouldn’t pay a dime to see either of them and being a country music fan, I’m insulted that the Country Music Awards had them perform when there was so much real talent out there to choose from. I would suggest never ever pulling this stunt again if they want to keep their audience.