Outrage After Brad Paisley Does THIS at the CMAs

Braid Paisley caused quite a stir at the CMAs last night with a Caitlyn Jenner joke that those on the left are calling “transphobic.”

Here’s what the left-leaning outlet Bustle had to say [1]about the harmless joke:

I thought by now it’s been thoroughly communicated that Caitlyn Jenner’s name is just that, Caitlyn, and a person who has always identified as a woman. It’s offensive and problematic to say, “Bruce Jenner is a babe now.” By referring to her with the wrong name and implying that something about Caitlyn’s gender has changed, the joke belittles the struggles — both personal and in the outside world — that transgender people go through every day. There is so much more to coming out as transgender that it’s overly simplistic and demeaning to refer to a public transition as “becoming a babe.” 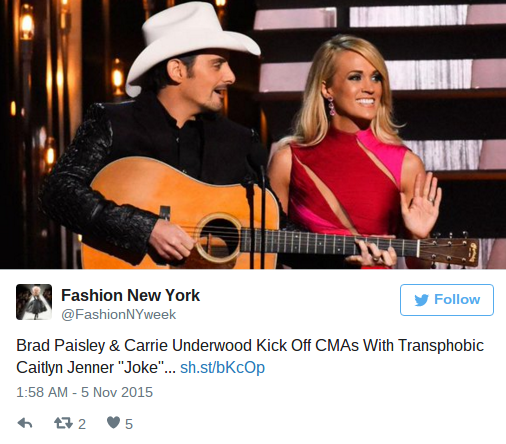 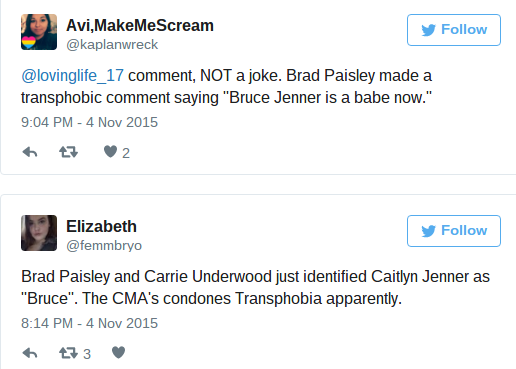 Steven Crowder pointed out[2] how ridiculous this “outrage” is:

Here’s the thing: they’re not even making fun of Bruce/Caitlyn Jenner here. They’re simply noting the  gender-change that has taken place in the public eye. They even used the term “babe” as to be jovially complimentary. I think they were being overly-gracious with that.

Brad and Carrie’s only offense here is merely acknowledging that Bruce Jenner transitioned to a ‘woman’ at all! They didn’t single Caitlyn out for mean-spirited jokes. They didn’t use newly-deemed “hate-words” like ‘tranny.’ Their crime here, was simply saying “Hey that famous guy, who was always a guy, is now a babe.”

… and then they moved on with the show. But leftists can’t. Because today’s SJW, leftist America is a place where all fun is strictly forbidden.

What do you think? Was Paisley’s joke offensive or is the left overreacting? Sound off in the comments section!