A Hive of 40,000 Bees is Discovered Under Bedroom Floor a Year After Homeowner Heard Loud Buzzing

Forget seeing the occasional cockroach or housefly — what this woman found in her house would leave any homeowner with nightmares. After hearing buzzing coming from her house for months on end, she discovered that there was a hive of 40,000 bees living under her bedroom floor. 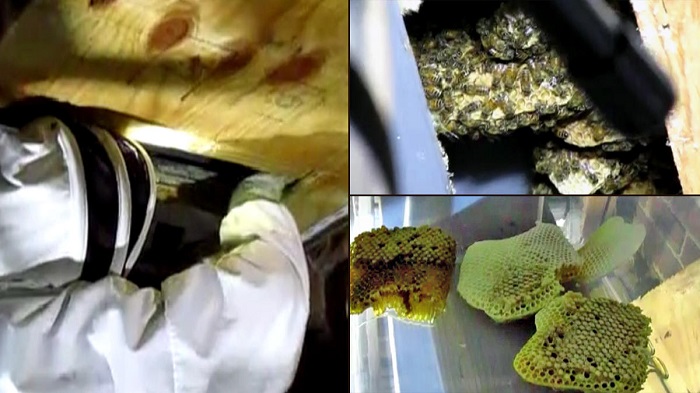 A hive of more than 40,000 bees has been removed from underneath a woman’s bedroom a year after she started hearing buzzing from the floorboards.

It took the retired detective two hours to extract the unwanted residents using a special vacuum which separates the insects from their hive.

He used an infrared camera to get to the heart of the habitat, then he started taking it apart piecemeal.

Video footage taken outside the home shows him pulling apart honeycombs dripping with the bees’ produce.

Mrs Dyczko called Mr Planakis in July last year when she saw a ‘humongous’ amount of bees swarming around the house.

Their used to be a beekeeper living nearby, but they had never caused any issues in the past.

He delayed the extraction because he feared they would not survive the winter.

The bees will be sent to live with a beekeeper while the homeowner can hopefully live in peace again. And if you hear buzzing coming from somewhere in your house, then you never know — maybe you’ll find a hive of your own, too.