They like it old-school in Alabama. Sometimes, though, something which is old-school is obsolete – and for good reason. We smartened up.

Davy Crockett wrestled a bear because he had to. These guys did it because they were drunk and stupid[1]. 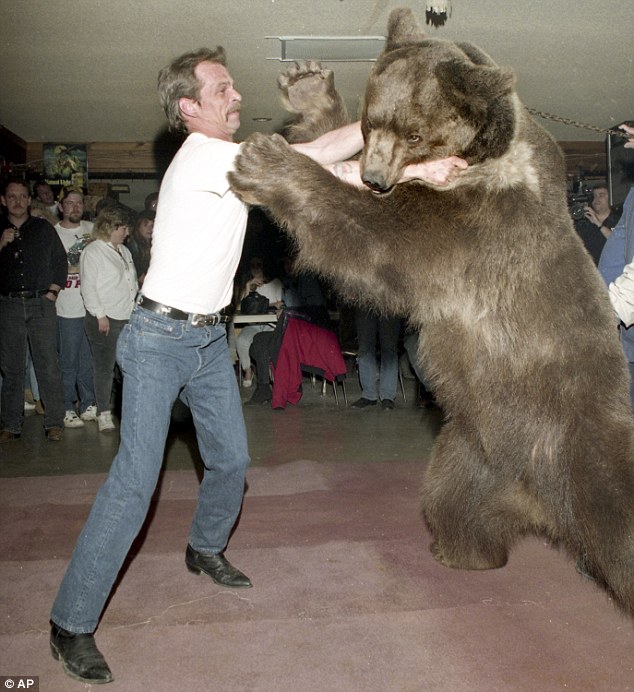 Photographs unearthed by AL.com on Monday show a grizzly sight: men grappling with a fully-grown bear in an Alabama bar while spectators look on.

The images are shocking enough as it is – but even more so when you realize they were taken just twenty years ago, when the ‘sport’ was legal.

The images show ‘Terrible Ted,’ a large bear, battling a succession of men in the center of The Ponderosa Club in New Hope, Alabama, in 1996. Ted’s owner can be seen in the background of some of the images holding the bear back with a chain.

The ‘sport’ of bear-wrestling – that is, humans wrestling with bears that had usually had their claws and teeth removed, or a muzzle placed over their faces – arrived in the US in the late 1800s, Bleacher Report claims, though it had been in Europe earlier.

And the novelty of seeing a man take on one of nature’s mightiest predators continued right into the mid-1900s, sometimes at county fairs, in professional wrestling showcases or as half-time events.

In 1980, for example, Huntsville, Alabama TV celebrity Jamie Cooper ‘wrestled’ Victor the Bear at the North Alabama State Fair – although the ‘fight’, which was broadcast on a local channel, mostly involved Cooper flailing around underneath the huge beast.

For Terrible Ted, however, fights were often staged in bars or car parks. Reports mentioning the bear go back to 1988, when The Orlando Sentinel reported that protesters had shut down one competition by using an archaic law designed to keep horses out of bars.

And in 1992, Walker was charged with disorderly conduct and cruelty to animals after taking Ted to a bar in Illinois, where men paid $5 to watch the spectacle, The LA Times wrote.

But in Alabama there were no laws against such events.

There are now, thankfully.There isn’t a lot of sport in bear wrestling or bear-baiting, another particularly bad idea that involved setting dogs on a beat which was chained to a post, and betting on whether the dogs could kill the bear before the bear killed the dogs.

There are still pockets around the country where cockfighting or dogfighting are still around, and in some Spanish-speaking places you can still catch a bullfight. We of course also still have rodeo, but given that rodeo events at least bear relation to actual job skills one might need on a working ranch that’s not the same thing.

There aren’t any job skills involved in bear wrestling. Intelligence is a job skill; it’s incompatible with that sport. We’re all better off that the law has severed the relationship between drinking establishments and grappling with woodland predators.