Most parents raise their children to have respect for their elders. One little boy, on the other hand, has evidently been raised to slap grandmothers and throw gang signs at them… and the video is quickly going viral[1]. 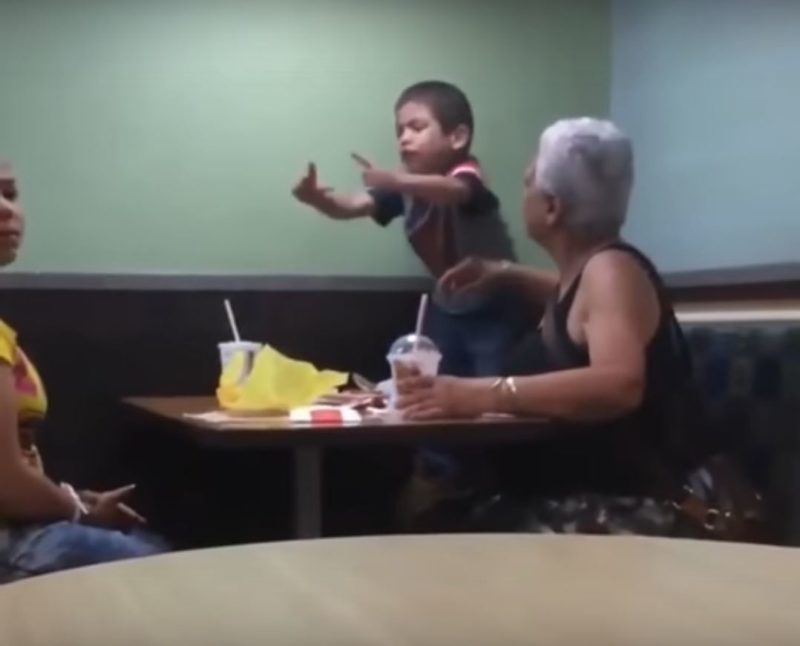 In the video, a young boy is seen eating with two women, presumed to be his mother and grandmother. The grandmother fights with him, trying to get the rambunctious child to sit down. He not only fights her and refuses to be seated, but he completely loses it when the grandmother reaches for what appears to be a to-go bag.

He then begins cursing at her and then picks up the bag and throws it, more profanities spewing from his little mouth. Next, he throws up gang signs and his grandmother smacks his hands to dissuade him. He appears to calm down for a moment and eats some of his food, but the reprieve is short-lived. He notices that someone is recording him and points it out in the middle of the restaurant. The grandmother tells the man not to record them, but he persists anyway.

The little boy responds by throwing up gang signs again. The grandmother attempts to correct him, but the mother doesn’t, except to complain that the boy is embarrassing her and that people in the restaurant are laughing at them. The boy hears her say that he’s embarrassing and responds by spitting at his mother… again, to no response from her. The grandmother steps up again, smacking him in response. This really sets the boy off, as he starts swinging wildly at her. Fortunately, he was just a little boy and the grandmother was able to get the upper hand quickly. But the fit of violence drew shocked gasps from diners in the restaurant.

The boy then begins spitting again and then laughs at his antics. You can see the entire train wreck here:

What would you do if your child behaved this way?