Usually, a pregnancy is a time of joy, with parents looking forward to the arrival of their long-awaited bundle of joy. But for one party girl, her baby was a total surprise, because she had no idea she was pregnant. 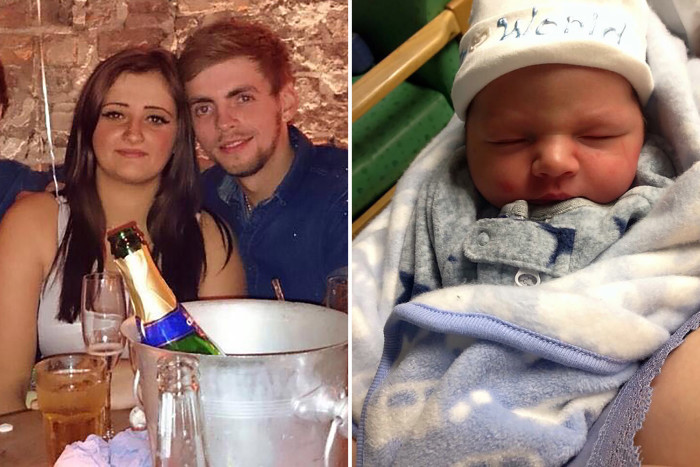 A party-loving barmaid who used to drink 15 Budweisers in one sitting was stunned when she gave birth without even realising she was pregnant.

Terri-Anne Hyde, from Newcastle-under-Lyme, Staffordshire, had been with her boyfriend for just ten months at the time.

However, she didn’t have a bump, was still having periods, and felt no kicks – so she continued her carefree, party lifestyle before suddenly going into labour in March 2015.

She was part of a dance troupe at the time and would exercise vigorously twice a week, unknowingly performing cheerleading-style routines while nine months pregnant.

The 21-year-old suddenly went into labour at home last March and refused to hold her baby when he was born – contemplating giving him up for adoption.

Terri-Anne was so sure she didn’t want children she’d even said in the past that she’d willingly undergo a hysterectomy.

But after baby Jacob was placed in her arms, she knew she’d never let him go.

She and boyfriend Jack Johnson now have their own home together – and Terri-Anne claims they even hope to have more children in future.

… Terri-Anne said: ‘Last March, I’d been having weird back pains for a day or two but I didn’t think anything of it. I got into bed one night and couldn’t sleep or get comfortable.

‘I went to the toilet and saw there was blood and some mucus. When I stood up, I suddenly felt my body start to push. It was like I didn’t have any control over it.

‘Sitting on the toilet was the only position I felt comfortable in. I looked online to try and find out what was going on, because the only thing I could think was that I might, impossibly, be in labour.

‘I searched “why is my body pushing?”. The results basically said I was in labour and listed all the things that were currently happening to me.

‘I was still living at home so I ran into my mum’s room to tell her what was going on. She thought I’d just found out I was in the early stages of pregnancy, but I said “No, I’m having a baby right now!”

‘She rang for the ambulance and when I asked the paramedics what was happening, they confirmed I was in labour. That was when I knew for sure and I burst into tears.

‘In hospital, they didn’t have a delivery room prepared but while I was lay on the bed I suddenly felt a massive bubble between my legs and then a sensation of it popping and the baby just slid out. It was lying under the blanket crying.’

Jacob was a healthy 7 lbs 9 oz when he was born. ‘I didn’t look at it at first and told them to take it away,’ Terri-Anne recalls. ‘My mum was crying as she told me it was a baby boy.

… ‘I wouldn’t hold Jacob in front of my family because I didn’t want to feel pressured into keeping him.

‘Me and Jack had been using condoms throughout our relationship. He did want children one day, but when he arrived at hospital the first thing he said was, ‘What the hell has just happened?’

‘Jack didn’t put me under any pressure to make a decision, but later that day I told him I wanted us to be a family and he was so happy.

‘I slept on my parents’ sofa for three weeks while my bedroom was turned into a nursery.

‘Then when Jacob was six months old, me and Jack got our own home.

‘Jack is an amazing dad, I couldn’t fault him. He would come and bring me anything I needed at the beginning, and he worked so hard to provide for us all.

‘People do say I’m a natural with Jacob. They say I’ve taken to it like a duck to water, but I was only able to cope because our families and friends were so supportive.

‘Knowing what it feels like now to have a child, I would have been heartbroken to have missed out. I think to myself now that there was so little in my life before I had Jacob.’

It’s nice to see that she was able to take responsibility for her baby and turn her life around because of him. It looks like she’s going to be a good mom, despite the rocky start.