People always seem to think that the rules don’t apply to them, but when it comes to wild animals, that’s a very dumb mistake to make. One woman decided it would be a good idea to try to take a selfie with a bison at Yellowstone National Park, and that decision backfired, big time. 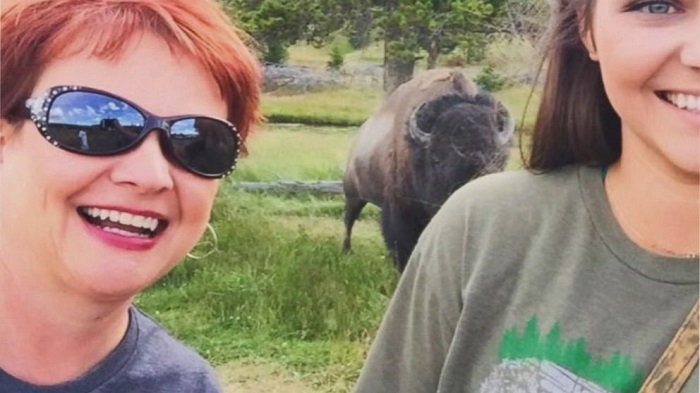 Yellowstone National Park officials are warning tourists to keep their distance after a bison flipped a woman into the air as she posed for a selfie with the massive beast.

The dangerous encounter was the fifth run-in between park-goers and buffalo at the park this year.

Park officials said the 43-year-old Mississippi woman turned her back on the animal Tuesday evening to get a photo with it on a trail close to Old Faithful.

In a news release, park officials wrote: ‘The woman and her daughter were by the trailhead sign when they decided to take a picture with a bison that was about 6 yards away from them.

‘When they turned their backs to the bison to take the picture, someone warned that they were too close.’

They tried to run, and the bison caught the woman and threw her with its head, park officials said.

In a statement, Old Faithful district ranger Colleen Rawlings said: ‘The family said they read the warnings in both the park literature and the signage, but saw other people close to the bison, so they thought it would be OK.

‘People need to recognize that Yellowstone wildlife is wild, even though they seem docile.

‘This woman was lucky that her injuries were not more severe.’

Here’s an idea: have some respect for wildlife and stop treating them like attractions at a zoo or a theme park. For some reason, this keeps happening at Yellowstone — how many people will be injured before the general public gets a clue?