Maryland couple Jody and Jeff Brooks are suing their realtor, Barbara Van Horn, after their “dream home”[1] turned out to be a nightmare. 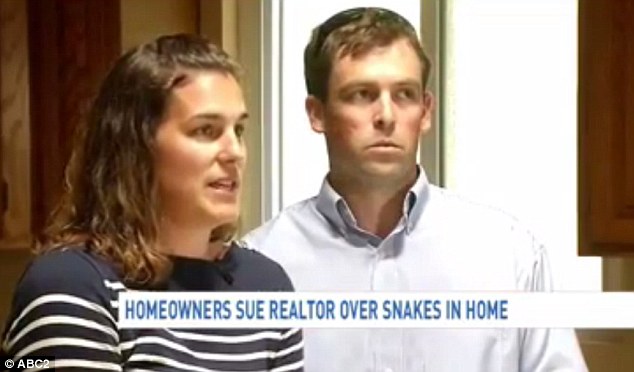 Attorneys for a couple suing a realtor for selling them a Maryland home infested with snakes may enter a live rat snake as evidence during a trial next year.

Jody and Jeff Brooks and their two children moved into their $410,000 Annapolis dream home in December 2014, but when the weather began warming up, they learned they were not there alone.

They found eight black rat snakes, numerous snake skins and trails of snake feces – and despite spending $50,000 to try to get rid of them, they were forced to move out.

The couple claims in the $1.5 million lawsuit that the seller’s real estate agent, Barbara Van Horn of Champion Realty Inc., hid her knowledge of the snakes.

According to court records, she has denied through her attorneys any knowledge of the snakes and disagrees that the house is not only defective, but uninhabitable.

A pretrial conference is scheduled for April, and then afterward a trial will be scheduled in the Circuit Court for Anne Arundel County, the Baltimore Sun reported.

The family paid for exterminators to set snake traps around the home – four outside, four in the basement, two on the ground floor and two in the attic – in an attempt to rid the home of the snakes.

The Brooks’ attorneys have told the court they may enter one of the live rat snakes that was caught in the home as evidence for the trial.

‘One is allowed to bring any kind of evidence into the courthouse,’ Robert Duckworth, the clerk of the court, told the Sun.

‘It’s up to the judge to decide what can be entered.’

The main question issue at hand for both the plaintiff and defendant in the lawsuit is whether the home was an established hibernaculum, according to the Sun.

Both sides have recruited snake researchers to testify on the habits of the Eastern rat snake, the Sun reported.

The Brookses’ lawsuit claims that the rat snakes, which are not venomous, tunneled through insulation, and that snake paths ran from the basement to the roof.

However, attorneys for Van Horn have named witnesses who are expected to testify that the rat snakes only entered the home in search of food.

One of those witnesses is John Sealy, a biology professor at The University of North Carolina at Greensboro.

‘He is expected to testify that once snakes have successfully found food at a location, it is not uncommon that they return to the same location,’ according to court records obtained by the Sun.

This just goes to show that you never know what kind of secrets people are keeping from you until it’s too late.
Endnotes: