I’ve always been kind of lukewarm about snakes. Like, I know some of them can kill you, but I don’t live around a bunch of the poisonous ones. so I’ve never really had to form an opinion or a fear of them.

Until now that is. I am officially jumping on the ‘I freaking hate snakes’ bandwagon. I have had it with these slithery-slimy, creepy critters who think they can just sneak up on you and wrap around your body. They are a menace, I tell you!

Ask this South African snake catcher who found himself hunted by his own prey. 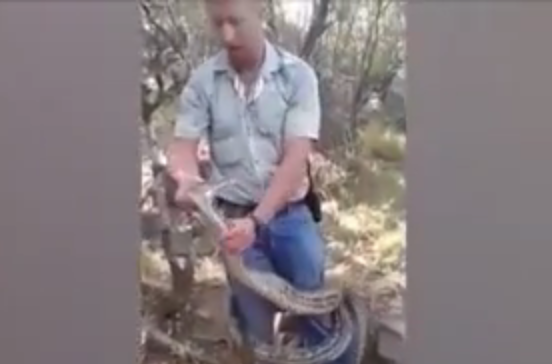 While the man proudly displayed his catch by holding its head tightly in one hand, he failed to realize that the slick serpent was wrapping the rest of its body around his legs. When it constricted, the snake made it impossible for the man to move or walk, and he had to receive help from his colleague in order to get free.

While pythons themselves are not venomous, that doesn’t make them any less deadly than a snake known for its poison. It wraps its long body (this monster was 9 ft. long!) around its victim and slowly chokes the life out of it.

Or, as in the case of a poor woman from Thailand, it just eats its prey whole. The woman is perfectly fine, but she did find her house cat had been devoured[3] by a snake that was hiding under the sink digesting its ill-gotten meal when she arrived home from work.

The crew that arrived to remove the python from the home managed to twist the snake and get it to regurgitate the poor feline, who was predictably dead.

If you can find little else to be thankful for, be thankful that you don’t live in a part of the world where you can come home to find your pets in the gut of a snake longer than most couches. Because those same snakes can find you particularly tasty at any point in time. Maybe even while you’re sleeping.

Okay, I’m freaking myself out now. I’m just glad that this story had a happy ending, with nobody dying or ending up snake food. It’s not quite as tragic or “interesting” to read about, I’m sure, but it makes me warm and fuzzy inside when I don’t have to write about death.