‘I Don’t Know Why You’re Out for Blood… I’m Not Paying’: Mothers’ Facebook Battle After Boy is Handed a $25 Invoice For Missing Classmate’s Birthday Party

People can do some incredibly petty things, but what one mother did when a little boy missed her son’s birthday party is beyond the pale. Julie Lawrence decided to send the parents a $25 invoice, and is even threatening to take them to small claims court. 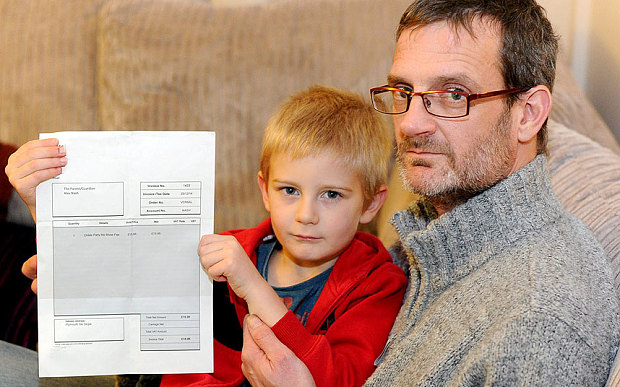 Tanya Walsh and her partner Derek Nash were appalled when their son Alex, five, arrived home from school with a £15.95 bill for missing his classmate Charlie Lawrence’s big day at a local ski centre.

After refusing to pay, Alex’s parents were threatened that they would be taken to court.

Since then Miss Walsh and Charlie’s mother Julie Lawrence have become entangled in a war of words.

‘I messaged Julie on Facebook to say sorry and let’s resolve this amicably. And she said: “The amicable way I believe is for you to pay me the money. And let that be a lesson learnt,’ Miss Walsh, 30, said.

‘The next thing I heard she was taking us to small claims court. My partner went to see her and it ended in an argument. She shouted down the street: “Don’t mess with me”.

… He had confirmed Alex would attend the ‘slide and ride’ party before Christmas at the Plymouth Ski Slope and Snowboard Centre.

Costing £15.95 a head, it would have included half an hour on a snow tubing run, three toboggan rides, a hot meal, ice cream, jelly and balloons.

But he then realised he had already arranged for their daughter to go on a day trip with her grandparents.

The host’s mother could have little luck getting back the £15.95 in court – where the administration fee to make a claim is £25.

The ski centre’s manager Louisa Duggan said: ‘It seems to be a dispute between two parents and the parent who wrote the invoice has put us on it, which is crazy because we have nothing to do with it.

‘We ask for a small deposit on booking and 48 hours before the party we ask hosts to confirm numbers and pay us the full amount. It’s £15.95 a head for a slide and ride party.

‘But there’s no such thing as a no-show fee. We don’t invoice private individuals, we just ask for payment 48 hours before.

‘If the child doesn’t show, to be honest we’re pretty flexible. We might give the hosts some extra toboggan rides or some credit at the bar.

‘I understand people being upset because people outlay a lot of money for these parties, so I understand their frustration.

‘Whether invoicing another parent is a good idea or not is not for me to say, but it’s certainly not something I’d do.’

It’s of course frustrating when someone RSVPs to a party and then doesn’t show up. But sending their kid home with an invoice and then threatening to take them to small claims court is so insanely ridiculous that it’s hard to wrap your mind around what could ever convince this woman that it was a good idea.