Farmer REFUSES To Let Two Of His Animals Be Digested By A PYTHON Does THIS With Bare Hands!

This is the shocking moment a farmer squeezed two goats from the stomach of a live python with his bare hands. This will shock and AMAZE you[1]! 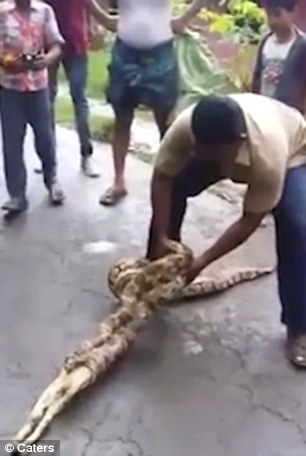 The unnamed man, from Kerala in south India, stunned onlookers as he pressed the bloated stomach of the 6ft-long python and the animals popped out.

Footage shows him holding the giant snake between his legs before trying to unravel its coiling body.

As the back end of a goat emerges in the middle of the road, commuters can be heard beeping their horns.
At one point, the man – who is wearing flip flops and jeans – even holds the python’s mouth as he pulls out the head of the baby goat, which has already sadly died.

The python is believed to have reached the highway after it hunted and swallowed the goats from a nearby village.
Residents ran to rescue the goats, which are a major source of income.

This is crazy! It’s too bad that the little goat didn’t make it, but it is amazing what this man was willing to do to save his life.