Father Dangles BABY Outside Window of 15th Floor for “LIKES”

With the advent of social media, people are doing more and more stupid things in the hopes of getting some small glimmer of Internet fame. This is usually okay, as long as the only victim of their stupidity is the person trying to get likes. But too often, parents drag their kids into it — and they take it way too far[1]. 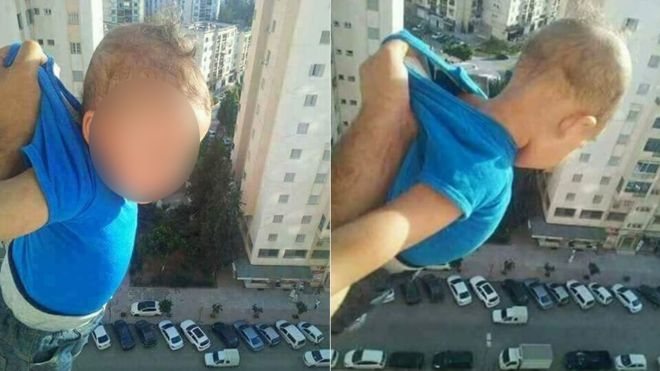 An Algerian man posted a photo of himself on Facebook holding a baby over a high-rise balcony… and he then threatened to drop the baby if he didn’t receive 1,000 likes. The balcony was 15 stories high.

Unfortunately for this caretaker of the year, he didn’t rack up likes as he had hoped. Instead, people contacted authorities, who tracked him down, arrested him and charged him with child endangerment. The man denied his guilt, however, and claimed that the photos had been altered by other social media users.

A relative also defended the man, saying that there were barriers in place to keep the child safe, but were removed for the sake of the photo. The man begged for forgiveness, swearing before the court that the child wasn’t actually in danger, and that they were “just playing a game.” The judge didn’t buy it, though, and sentenced him to two years in prison. Saying that the picture clearly showed the child’s life was in danger, the judge found him guilty.

While the man’s identity has not been released, news reports said that he is not the child’s father, but rather, a relative. The photo did go viral online, as the man had hoped, but because people were horrified and outraged. Many called for his arrest, with thousands of Algerians praising the judge for finding him guilty and placing him in jail.

Do you think two years in prison was a fair sentence?