I don’t think I’ve ever seen[1] this kind of fish caught before – they say it’s a prehistoric monster. I’ve read of it in books and have seen pics, but never realistically in a video or up close. The producer of BlacktiopH Fishing managed to hook a 700-pound sawfish. He was shocked by what he had at the end of his line. I guess he thought it was a shark or a stingray… but it was something even cooler.

The video starts off in a boat, but then you see him on the beach trying to reel in this modern day dinosaur. I don’t know how he didn’t get pulled into the ocean. Eventually he was able to touch its fins and tail. He used a bolt cutter to remove the line and hook before his new friend swam back to the deep. 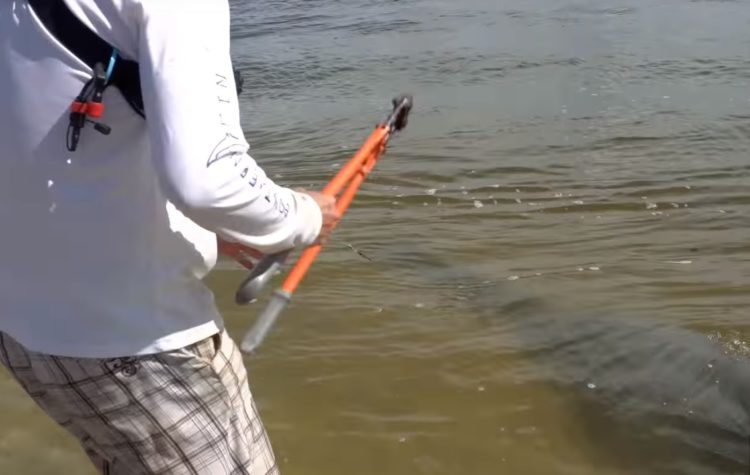 A Florida fisherman got a humongous surprise recently when the 700-pound fish he’d hooked turned out to be a critically endangered prehistoric monster.

While filming an episode[3] for extreme fishing show “BlacktipH Fishing,” producer Joshua Jorgensen hooked a 17-foot sawfish, not realizing at first what he was getting himself into.

As the fish whipped its massive tail and serrated saw, the fisherman came to understand that he was going to have to hold on and enjoy the ride.

“I’m hooked up to an absolute monster,” Jorgensen said, wondering if the fish was a giant ray. “He’s dragging this boat literally wherever he wants to drag it.”

As soon as he realized what was on his line, Jorgensen looked into the camera and said he needed to call the Florida Fish and Wildlife Conservation Commission because he’d hooked a sawfish.

“I’ve never seen one of these in my life and it’s a very endangered species,” he said.

“How do we handle it?” Jorgensen asked an FWC agent on the phone.

He was told not to pull the fish out of the water but to try and get an accurate measurement before cutting the line.

Sawfish are very dangerous for obvious reasons. This one was 17-feet long – just huge. If you can believe it, they are a type of ray.

“Research is underway to learn more about these elusive creatures, but one thing is for certain: They are dangerous,” FWC said on its Facebook page. “If you catch a sawfish, be sure to keep it in the water at all times, cut the line as close to the hood as safely possible and report the encounter to (the FWC sawfish hotline) 947-255-7403 or [email protected]”

Definitely the catch of a lifetime. 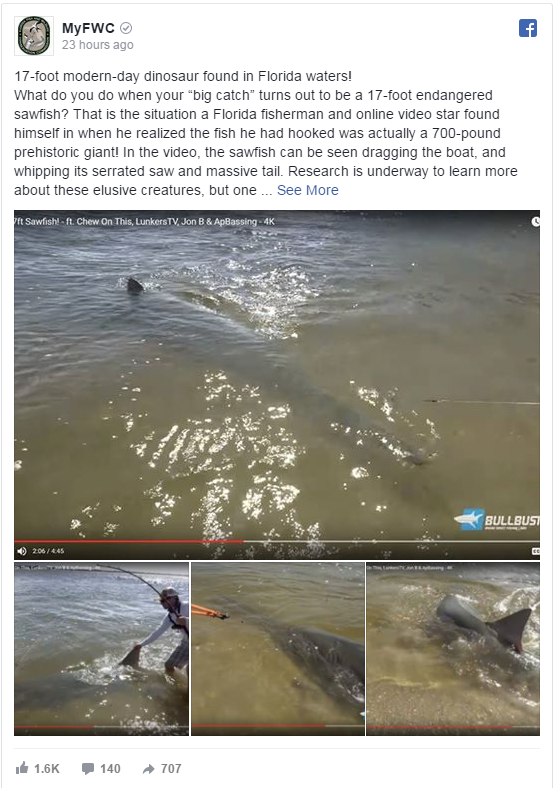