On today’s episode of “What the Hell is Happening in This Country?,” we have a woman who is shamelessly relieving herself in public and on the lawns of those in a sleepy Colorado suburb. We’re not talking like once because it was an emergency, this happens so often that Cathy Budde (whose yard appears to be a favorite of the crap-happy suspect) was able to snap a picture of the suspect.

Who does this? What possesses a person to do something like this over and over again? Are you mentally ill? Were you literally raised in a barn, where something like this would at least be considered somewhat acceptable? What is WRONG with you, lady?

According to Budde, the suspect – pictures above – has been on her pooping spree for seven weeks now and regularly visits her yard. Once, the woman claims her children caught the suspect with her pants down in the yard. When Budde confronted her, she apologized and ran off.

And then returned a week later to do the same exact thing.

Cathy believes the suspect is doing this on purpose, because she comes with her own napkins, knowing that she’s going to be… well… going.

Keep in mind that Budde lives near a park, where there is a pubic restroom. The woman is choosing to defecate on someone’s lawn over using a public restroom.

The family has snapped pictures of the suspect, as well as placed signs on the wall letting her know that if she continues to use the area as her personal restroom instead of finding an actual toilet to use, she is going to be grabbed by the police. 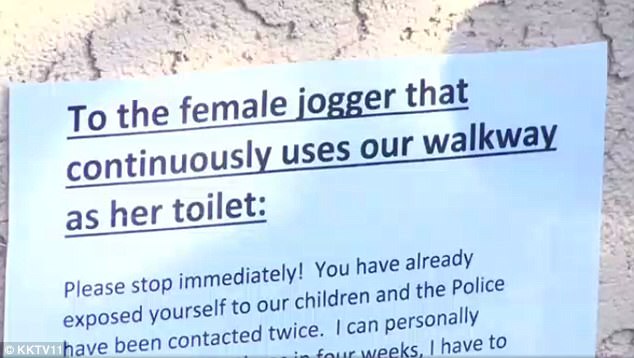 Authorities say that when and if the woman is caught, she is facing indecent exposure and public defecation charges.

Okay, ew. First of all, what kind of messed up do you have to be in order to actually do something like this? I mean, perhaps I could understand in the case of an emergency. I wouldn’t be particularly pleased, but I would also let the woman know that she could come in and use my restroom if she so needed, because the average person would be embarrassed by this behavior.

Not this suspect, however, who appears to view this as some sort of game, or something you do just as easily as you breathe. She seems to think that it’s normal.

I honestly hope the police catch her, because this is just unsanitary and sickening, and honestly something that we shouldn’t have to deal with in a first-world country.