Male Kim Kardashian Fan Spends $150,000 on Over FIFTY Cosmetic Procedures to Transform Into His Idol

Kim Kardashian, for all her faults, is a gorgeous woman, so it’s not entirely surprising that a person may want to look like her. But when that person is a man, and he shells out $150,000 on over fifty procedures to make himself look like a freak, then you’d be forgiven for questioning that person’s sanity. 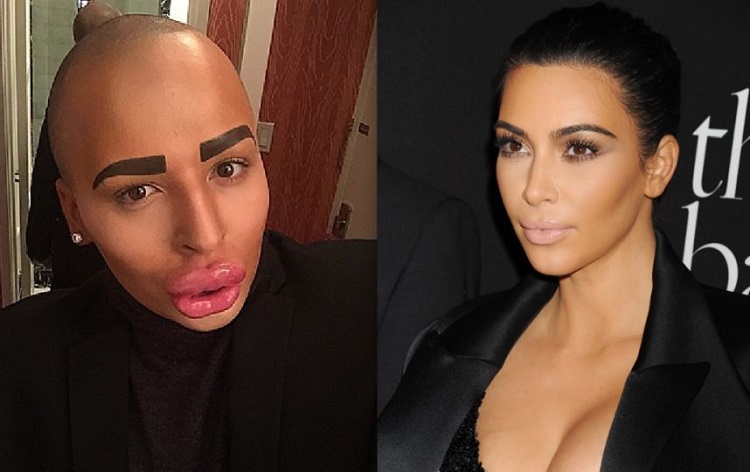 She graces several magazine covers a month, has her own reality show clothing and make-up brand, and has millions in the bank

So perhaps it’s no surprise that 23-year-old Jordan James Parke wants to be just like Kim Kardashian.

But the British make-up artist has gone to extreme lengths to replicate Kim’s unique pouty image, splashing out a whopping $150,000 on cosmetic procedures to look like the star.

… In a bid to resemble his idol, Jordan has undergone more than 50 cosmetic procedures including Botox, lip and cheek fillers, eyebrow tattoos and laser hair removal.

His over-the-top appearance hasn’t been without its detractors – but Jordan isn’t too worried.

‘I laugh when people try to insult me by telling me I look plastic or fake,’ he reveals. ‘Do they think I’m going for the natural look? If I was, I’d ask for my money back.

Here’s a question: who are the doctors willing to do these procedures, and do they have no ethical boundaries they won’t cross? This is a person who clearly has some psychological issues at play, and he is obviously being taken advantage of by some doctors with questionable ethics who seemingly just want to make an easy buck.