NAKED MAN Breaks In to Woman’s House For A HUG- Then Jumps Down 50 Foot Cliff, Gets Stuck In….

A mother of two, suffering from muscular dystrophy, never thought that she would see a naked man burst into her living room before trying to hug her while saying: ‘Hi, honey.’ (Spoiler alert: It’s NOT her husband) Unbelievable:[1] 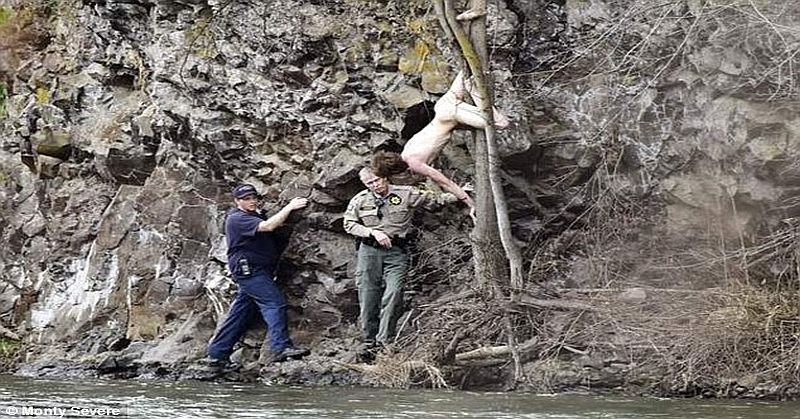 Gail Wilson, a former corrections officer from Pendleton, Oregon, said she thought she was going to be raped or killed after suspect Steven S. Burton, 30, broke into her home on Saturday.

Wilson said the traumatizing incident only stopped when she called the police, Burton fled her home and attempted to jump 50ft into a river before getting stuck in a tree.

The incident began around lunchtime on Saturday, according to the East Oregonian, when Wilson was sitting in her home eating soup while husband Robert and her two children were out of the house.

She said that Burton suddenly appeared in the doorway of her home naked and with a big grin across his face before throwing his arms open and trying to hug her.

Wilson said that because of her weakened muscles she had to wait for Burton to get close before she was able to push him away, Fox 12 Oregon reports.

She recalled being forced to push Burton several times while telling him to stop, before he picked up the family dog and shut it in a room at the back of the house.

Wilson said: ‘My first thoughts were, this is it. This is my time. He’s going to rape me, beat me, kill me.’

After locking the pet in a back room, Wilson said Burton returned to her living room where he sat on her mobility scooter and looked around for a while.

At some point she managed to dial 911 and said police arrived as Burton was checking out the shed in her front yard, at which point he fled.

Pendleton Police Chief Stuart Roberts said Burton ran two streets over to a bank above the Umatilla River, climbed up a cyclone fence, and then dived 40ft to 50ft into the ravine below.

After tumbling down sheer rocks Burton got his ankle caught in between two branches of a tree around two feet off the ground, where he was left dangling until crews came to rescue him.

Roberts added that Burton appeared to be in a mind-altered state, similar to the effects of PCP or hallucinogen LSD, and lashed out several times as he was taken down – including on one occasion where he reached for an officer’s gun.

Eventually Burton was subdued and strapped to a back-board where he was sedated before being winched back up the cliff and arrested.

Well, those officers are nicer than I am. I would have left him there to figure it out for himself. Then again, anyone who breaks and enters on my property would be lucky to get out alive.