Ohio woman makes terrifying call to 911: ‘I have a boa constrictor stuck to my face’ [VIDEO]

On today’s episode of “People I Would Never Want To Be,” we have a woman from Ohio who dialed 911 after having a boa constrictor latch onto her face.

The snake was 5’6 long and according to the recording of the police call, was biting her nose.

I thought boas only choked their victims to death, so this is a new one for me. 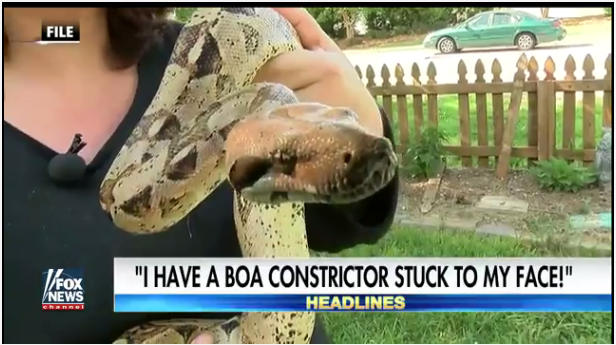 As proof that no good deed goes unpunished, the 45 year-old woman was attacked in her front yard by the very boa constrictor that she had saved the previous day.

Neighbors claim that she is known for having some exotic pets, including snakes, but something tells me that she loved the little guy a lot more than he loved her.

The 911 call was panicked as the woman begged for emergency services to get to her quickly.

Watch the video below[2]:

“I have a boa constrictor stuck to my face,” the woman yelled.

Minutes after the call was made, the responders arrived at her home to find the snake’s fangs very deeply embedded in the soft, squishy tissues of the lady’s nose.

Unfortunately, one of the firefighters at the scene was forced to kill the snake in order to remove it from the woman’s face. He pulled out a pocket knife and used it to cut the snake’s head.

The woman was transported to the hospital after suffering non-life threatening injuries. She also stated that she owns 9 ball pythons, none of which have attacked her. This must have come as quite the surprise then, but that’s one of the things you risk when you deal with nature.

It’s going to be interesting to see if she continues to adopt snakes after this incident.