I can’t be the only person on the planet who is absolutely amazed by this. Even if you’re afraid of snakes, you have got to watch this video because it’s nothing short of fascinating.

A pregnant sand boa gave birth to live baby snakes, which caused a lot of people to scratch their heads. Don’t snakes usually lay eggs? If you’re asking yourself the same question, you’re in good company.

And that very question makes this video all the more riveting. 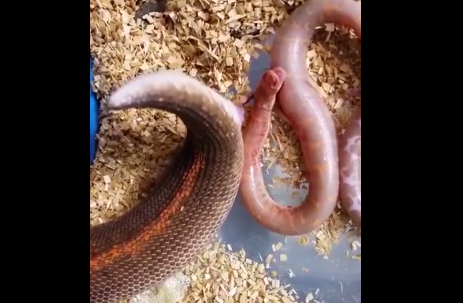 The video was posted by Reptile Collective on Facebook and it shows a mama sand boa giving live birth to two of her six babies.

Do they make an epidural for snakes? That was my first thought in watching this because you just know that had to be painful. I think any human mom can appreciate this from a purely biological standpoint.

I love how, when the first baby came out it raised its head and opened its mouth like it was gasping for air. I don’t know if that is actually what happened here, but that’s what it looked like to me. Perhaps it was the equivalent of a human baby crying after a mother gives birth.

I know nothing about snakes.

But back to the question about eggs, because I’m sure that’s what’s on everyone’s mind right now.

This seems like one of those interesting facts you’d find on the inside of a Snapple lid, but there you have it.