Rare Phenomenon – The Bahamas Has NO Ocean, Irma Has Taken It Away [VIDEO]

Irma has laid its course through Florida and it’s taken a lot of ocean water with it. There is incredible footage of the islands down in the Bahamas, suffering from a lack of water. No, seriously. There is ZERO water surrounding the islands. You can see that the shorelines have receded, which isn’t a new thing, but Irma was so powerful, that the waters receded the furthest anyone has ever seen, much farther than normal, and it left you a view of the ocean bed. 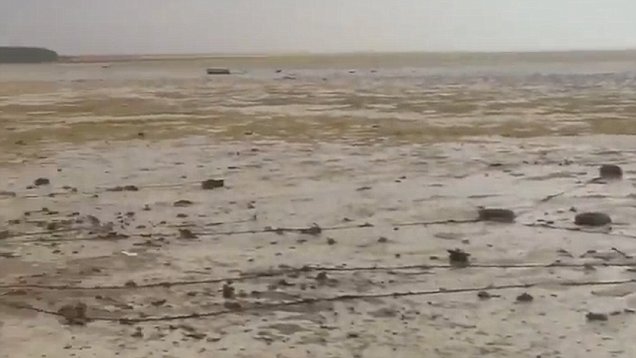 One Twitter user going by the tag @Kaydi_K, who lives in the Bahamas, wrote: “I am in disbelief right now… This is Long Island, Bahamas and the ocean water is missing!!! That’s as far as they see #HurricaneIrma.”

I am in disbelief right now… This is Long Island, Bahamas and the ocean water is missing!!! That's as far as they see #HurricaneIrma[2] wtf pic.twitter.com/AhPAonjO6s[3]

In the video posted, you can see her taking a stroll along the ocean floor. Although at a different place in the Bahamas, another Twitter user sent out a photo that was taken of the beach close to them and revealed that it had returned back to normal just within a few days.

Hurricane Irma was an absolute beast. It passed through the Bahamas with so much force, it took a lot of the water with it. Though locals shouldn’t be worried about it, because by Sunday afternoon, experts claim that the water should return to normal.

The combination of Irma’s huge strength and the really low center of pressure it carried with it, made it possible for Irma to draw mass amounts of ocean and bring it to her core. Meteorologist Angela Fritz informed everyone that she had suspected a hurricane “bulge” may have been the reason for the disappearance. This particular storm had low pressure, which drew the water upward with it, and naturally away. She had also made the point that at the moment everyone saw the bare ocean floor, winds where blowing away from the shore, which also contributed to the slow return of the water.

Of course, the many times we have seen the receding of the shoreline, it usually is followed by the mass return of ocean water in the form of a tsunami. Many Twitter users thought they were scientists and foolishly sent out warnings of the ‘impending’ rush of waves that may happen.

Fortunately, Fritz is an actual meteorologist who knows what she is talking about and had to correct the wayward Twitter heads, stating that the ocean will ease in back to its original form – minus the tsunami part.