Seeing a random couple walk through a grocery store doesn’t usually garner much of a reaction from other shoppers. But one couple got a lot of shocked stares from other shoppers — and it’s all because of what the woman was wearing[1]. 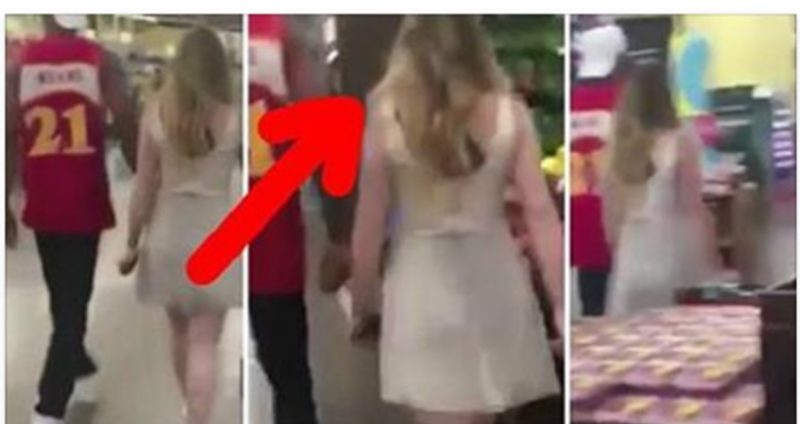 An outraged shopper filmed a man walking his girlfriend around a grocery store on a leash. The woman filming the incident called it “humiliating” and wasn’t shy about addressing the couple. “That’s got to be a prank, you know you’re going to get videoed in this store,” she said.

The woman wasn’t only wearing a leash; in addition to being paraded around the store like a dog, she also had a muzzle over her mouth. The man, meanwhile, was wearing regular clothes, clad in a red jersey with a white hat. Neither of them seemed to be doing any actual shopping, as they didn’t have a shopping cart or basket. The woman continued to film them until they left the store.

Response to the video online was mixed; some thought it was just a prank or a way for the couple to get attention. But others were concerned that there was a more sinister explanation.

“That’s some evil, ugly stuff right there,” one person commented at the Daily Mail. “You can rationalize all you want but you would be wrong. Don’t care if you don’t understand. BTW, oh if the races were reversed in this scenario! It would be covered on all TV channels, front page newspaper articles, riots and celebrities hash tagging their hypocritical fingers off.”

“And no one called the police?” another person asked incredulously on Facebook. “This girl could be part of human trafficking and he’s parading her around as if he knows nobody’s going to do anything about it. And that’s exactly what the dumb clucks in the store did, nothing! Oh, Let’s take a video but let’s not do anything to save this girl from human trafficking.”

“The girl avoids eye contact and doesn’t look happy,” another commenter agreed. “I think he’s parading her around the store to prove no one cares what happens to her and she’ll be on the street that same night for this pimp. Nothing more, nothing less. Shame on those people for not calling the police!”

What do you think of the video clip?