The Story Behind Viral Photo Of Houston’s Flooded Nursing Home Is Insane!

Tragic stories continue to pour out of Houston, Texas in the aftermath of Hurricane Harvey. The city is flooded and the situation is only expected to get worse, as rain continues to fall. But one particular heartbreaking photo has gone viral, of nursing home residents trapped in a flooding room[1]. 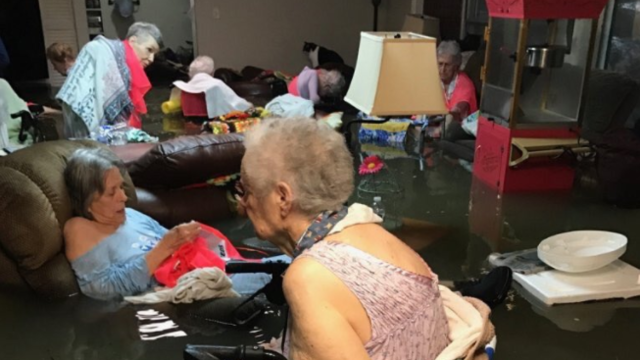 The photo shows elderly women, some in wheelchairs, in a nursing home with water above their waists. Strangely, the women all seem to be going about their business as usual, with one even appearing to knit.

Originally posted on Twitter by Tampa, Florida resident Timothy McIntosh, the photo quickly went viral as McIntosh pleaded with rescuers to get the women out.

The nursing home is located in Dickinson, between Houston and Galveston, and is owned by McIntosh’s mother-in-law. At first, many questioned the photo, thinking it had been doctored. But Dickinson officials investigated and soon confirmed that it was real.

But McIntosh’s viral tweet helped. By Sunday afternoon, 15 nursing home residents had been rescued. Dickinson emergency management coordinator David Popoff explained that they had been airlifted from the facility and to safety.

RESCUED!! Thank you to the National Guard & the Galveston City Emergency crew for our rescue; @GalvestonOEM[7] #houstonflood[8] @NationalGuard[9]

Thanks to all the true believers that re-tweeted and got the news organizations involved. It pushed La Vita Bella to #1 on the priority list

Hurricane Harvey continues to ravage the Houston area, with as much as 85% of the city under water. It’s being described as an 800-year flood and the city is expected to get as much as 50 inches of water in the next several days, if not more.