It’s understandable to be confused when trying to drive in a foreign city, on roads you aren’t familiar with. But understanding tends to come to an end when confused driving turns into a rampage that damages 13 cars and injures two people. 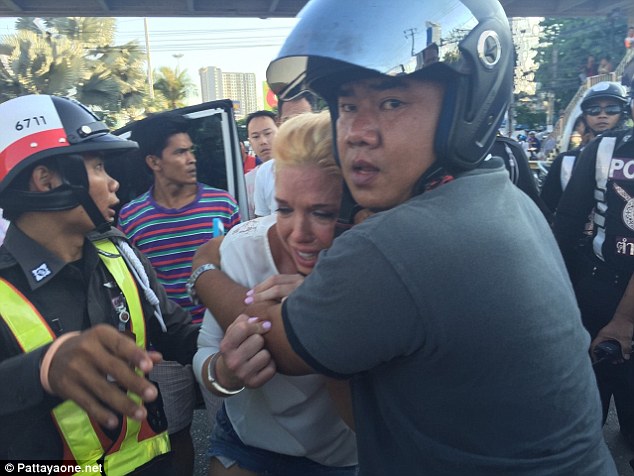 Police in Thailand opened fire on a car driven by an ‘crazy’ American tourist after she drove the wrong way down a busy road and crashed into 13 vehicles, injuring two people.

The 29-year-old woman, named by local media as Samantha or Amanda, was chased by police through the Pattaya region for 30 minutes before they shot out three wheels of her car.

After the smashed-up car came to a halt, officers broke the front passenger window of the white Toyota Innova to arrest her when she refused to open the door.

The blonde woman was then bundled into a police car – to protect her from an angry mob that had formed in the wake of the carnage, who hurled abuse and tried to attack the American.

The Bangkok Post described how the woman played ‘demolition derby’ through the streets of Chon Buri’s Banglamung district, in a saga which began when she drove the wrong way down Soi Siam Country Club in East Pattaya and clipped a motorbike.

The driver did not stop – instead carrying on driving the wrong way down Sukhumvit Road, facing into traffic.

As police pursued her the car hit 12 other vehicles.

‘It was a crazy bit of driving,’ a police officer told the Phuket Wan Tourism News.

‘The American woman struck a motorcycle going the wrong side down the road then kept going. She turned a corner and kept hitting other vehicles, 13 at last count.’

Here’s a helpful hint on what to do when you get lost and start to panic while driving: stop the car. There’s no reason to continue driving when you’re smashing into other vehicles and, even worse, people.