Believe it or not, it has now been reported that Houston might become an even more dangerous city due to 350 alligators that could soon be on the loose due to rising floodwaters from Hurricane Harvey[1] and they all would be coming from a animal sanctuary that is about to be flooded out. 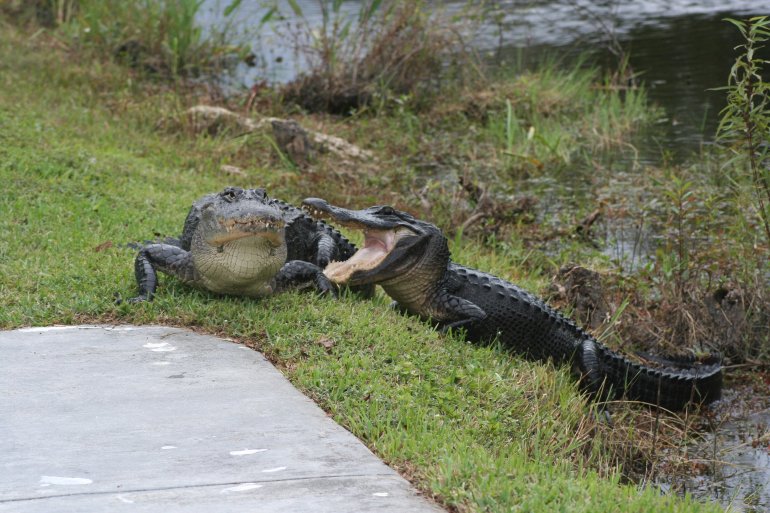 The rain has caused the water to rise just under a foot of the fences of Gator Country in Beaumont, which is the sanctuary that keeps hundreds of the harmful reptiles. The sanctuary’s most dreaded residents, which are two 13-foot alligators called Big Al and Big Tex, are being kept in trailers so that they can’t escape in the flood.

The real problem is that workers at the sanctuary are claiming that they can’t do anything to prevent the rest of the alligators from escaping, as they are numerous and their enclosures are all open environment..

Gary Saurage is the founder of the sanctuary for these reptiles and he said:

‘All of these are certified, high fences, but when it won’t quit, it won’t quit. We’ve worked around the clock and I don’t know what else to do. We’re truly tired. The good news is, we caught all of our crocodiles, all of our venomous snakes.’

Mr. Saurage is a professional who has spent the last 12 years being a sort of alligator catcher. He stated that you could expect to find these alligators poking around in people’s backyards if rain levels rise above the sanctuary’s outer fence.

On his personal Facebook account this week, he showed the flooding that was occurring outside his front door, which he was able to float up to on a boat. In the video, he explains the desolation of the floodwaters which are ‘four to five inches away’ from seeping into his house and causing major damage.

‘I promise you we’re going to make a comeback. I don’t quit that easy.’

Texas is still being devastated by the water and help needs to come from all over the country if they are going to recover from the damage.