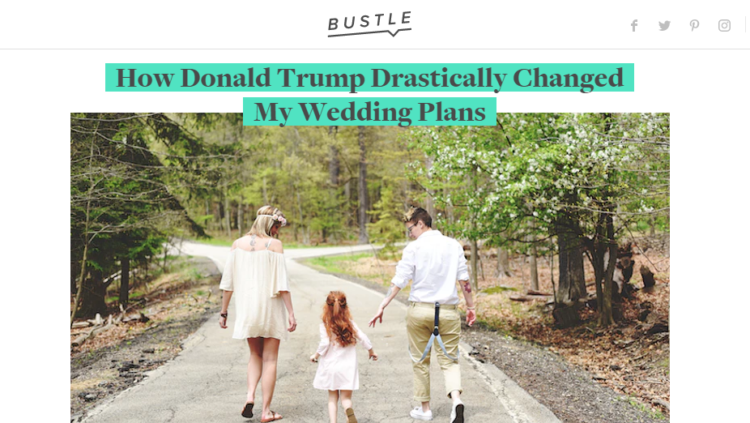 Trump Derangement Syndrome is the gift that keeps on giving. Donald’s only been in the White House for less than eight months and he’s still ruining liberal lives every day.

Beth McDonough writes for Bustle, an online feminist magazine, and is looking for sympathy from wherever she can get it.

As she wrote in her article titled How Donald Trump Drastically Changed My Wedding Plans[2]:

I came out as bisexual just over two years ago when I fell in love with the woman who is now my wife. My conservative, Christian family from small town West Virginia were nothing but open, loving, and supportive. The first family event I took my wife to was my cousin’s wedding, and he and his new wife welcomed her with warmth and excitement.

Things keep going well for her, despite her belief that her rural family would burn her at the stake. Here’s the money quote from the whole thing, where her sunny outlook turns dark: 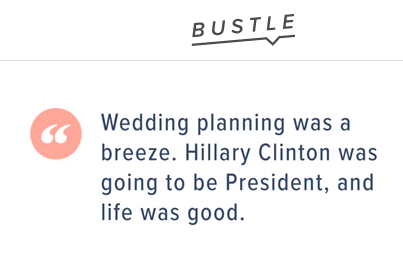 And it all goes downhill from here. She tells us that she was once a registered Republican, but that before this year, she never even bothered to vote. She said while her family was accepting of her life, they didn’t really want to talk about it. She starting after nightmares that her same-sex fiance would have government people show up at the door, telling her fiance that she was no longer allowed to raise her daughter (where is her daughter’s father?) because having two mommies is now illegal.

This is the kind of thing she wrote in Bustle that lets us all know she watches CNN:

Once Trump won the nomination and picked up even more steam against Clinton, I became terrified, and I got vocal about it. I attended rallies, I sent articles to my parents, I pleaded on social media for everyone who loves and supports me to please put their taxes and guns aside and stand up for human rights.

Election day came and went, and I woke up in a stupor of shock. We lost. How could we have lost? The future was supposed to be bright and fair, not dark and hate-filled.

There’s just too much in this insane article to cover here, so I’ll let the Newsbuster team finish this off:

Naturally, she did what any newly woke, radical, alt-lefty, bisexual would do. She attacked her family. On the internet. “I wrote about the destructive election results, how I wasn’t going to stay quiet about my discontent, and the dismay and sympathy I felt over my family, who all had to sit across from one another for dinner on Thanksgiving so soon after this historical event.”

Her family was displeased and called her a “bigot.” One told her that if she, “couldn’t respect other people’s right to have their own opinions, then neither he nor his brother and their wives would be attending” her wedding. She summed it up patting herself on the back, celebrating, the “seeds of love, tolerance, and acceptance that I’m planting in the family I’ve chosen to grow.”

Too bad none of her wedding guests decided to gift her with one of the newest items in the Trump shop, a mug that says I <3 Waking Up & Remembering Donald Trump Is President[4].