VIDEO: Champion Female Kickboxer Pranks Martial Arts Trainers by Pretending to be Weak, Then Beating Them Down

I love a good prank video[1] as much as the next person, and this might be the best one I’ve ever seen. Females are the biologically weaker sex, so seeing a woman get the upper-hand in a physical fight with two male martial arts trainers makes me giggle. 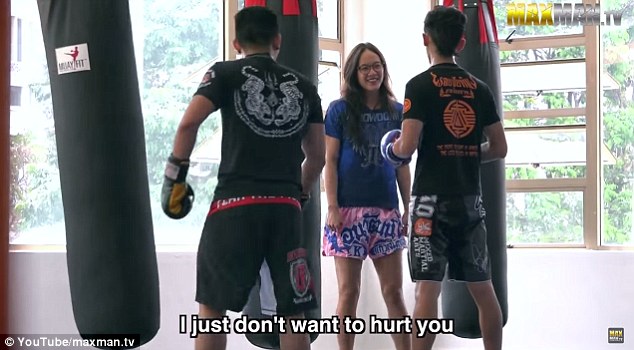 With her diminutive stature and demure glasses, Germaine Yeap looks like a hard working student – but looks can be very deceiving.

In fact, the 30-year-old is a professional muay Thai fighter, who used her unassuming appearance to play a prank on two trainers at a Malaysian gym in a new YouTube video titled, ‘Nerdy girl beats up guys at the gym’.

Germaine was filmed pretending to be a feeble beginner and luring two swaggering kickboxers into the ring – before giving them the fight of their lives.

It then cuts to the prank itself, as Germaine, who has been training for six years, enters the Damansara Perdana Muay Fit gym, near the capital of Malaysia.

Looking bashful, her hair down, and her arms held rigidly by her side, Germaine looks unsure as she throws weak punches at a bag and pretends to be too weak to do sit-ups, even tittering with embarrassment as one of the trainers tries to pull her up.

Finally she approaches one of the men, and asks him if he could show her how to spar.

They enter the ring – with Germaine throwing in a fake stumble for good measure – where now wearing shin pads and her hair tied back, she is looking more like the famous kickboxer.

The undercover fighter throws some listless punches at the over-confident trainer who bats them away and urges her to punch him more, taunting her by saying, ‘don’t be scared’.

He gestures at his jaw and urges her, ‘come on punch me,’ before demonstrating a rather ungentlemanly fighting style by punching the ‘beginner’ lightly in the face and pushing her into a corner so she’s up against the ropes.

He even mocks her footwork, saying, ‘it’s not salsa’, as he pretends to dance.

Intercut are other scenes of Germaine fighting another trainer who effortlessly flips her over and pushes her against the ropes.

One of them even manages a kick aimed at her stomach and they spar until she cries, ‘stop, stop’, and wipes hair from her eyes, as though she’s exhausted.

The video cuts again and finally Germaine is seen unleashing her full power, pounding the unwitting trainer with her fists, backing him into the corner, kneeing him and flipping him to the floor until he’s groaning on his back.

Only then does she lean over and ask, ‘do you need a break?’

She’s seen summarily despatching the other trainer in the same way.

Finally, she tells her opponent, ‘there’s a camera right there’ and points in the direction of the lens, and gestures at a laughing onlooker and says, ‘it was his idea.’

The trainer was left in good physical shape but no doubt his ego took even more of a beating.

Absolutely awesome. I’ve never heard of this young woman before, but after seeing some of those moves, I’d be terrified of being on her bad side.