VIDEO: Giant snake emerges from a family’s TOILET because it had grown too big for the pipes

Nope, nope, nope. Absolutely not. There is absolutely no way on God’s green Earth that this would ever be okay. I would move out of that house, village, state, country, continent, whatever. As long as it gets me away from that unholy creature.

This thing was living in the pipes and feeding on sewage (yuck) and had grown too big for his home. So, he relocated into some poor family’s home. Disturbing video shows the creature slithering out of the bathroom like some sort of horror movie scene.

Not exactly what my heart needed today, but alright. 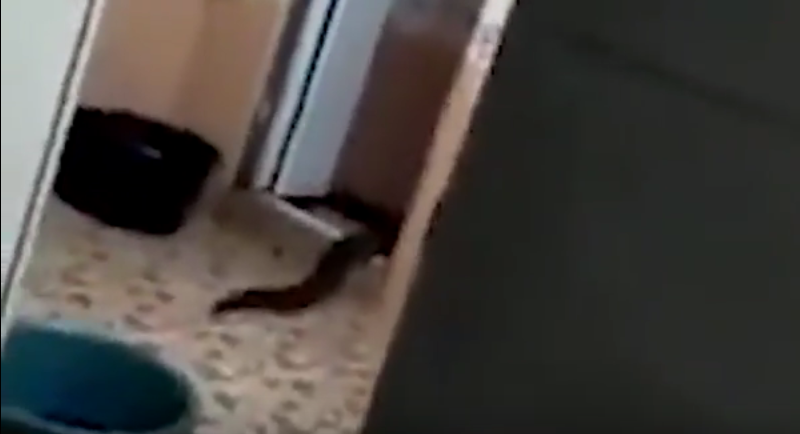 An unfortunate family from Alor Setar, Malaysia received one heck of a shock when they saw a dark, snake-like creature wriggling its way out of their bathroom. It appears to actually look around the room before deciding to make its exit.

Zul Hanif Anip, 25, is a photographer and was at home with his wife when he noticed the strange, slimy critter worming its way about his house.

“It was scary,” Anip said. “It came up through the toilet. I think the creature grew up inside the pipe works connected to the toilet hole, because I have checked and there is no entry point for it to have got inside.”

When he described the creature, it was clear that it wasn’t any snake that he had seen before.

“He was about two meters long with a very fat, thick body,” he explained. “I’m not sure if it was a snake or a kind of tidal creature or from the swamp. It’s head was very small and it had a short tail, which did not look like a snake.”

If that’s not a snake, I want to know exactly what it is. I don’t know if I can sleep at night knowing something could be growing in my pipes, just waiting to slither its way out of my toilet. Though to be fair, the number of chemicals I’ve seen down my toilet to clean it would surely have killed it by now.

Or perhaps it would have just mutated into some sort of Satanic creature the likes of which nobody has ever seen. You know, like in those horror movies. Or are they documentaries?

You’ll be happy to know that whatever kind of creature this is, it was humanely captured and released into a nearby river, where it will no doubt terrify some innocent fisherman just trying to enjoy his day.