VIDEO: This may be the craziest marriage proposal response ever

A proposal is supposed to be the second happiest moment in a couple’s life. (First should be the wedding.) However not everyone responds the same way when surprised by the love of their life taking a knee with a ring in their hand.

Some people start crying, some scream, some can’t speak and others start yelling incoherently.

And then there’s this woman. 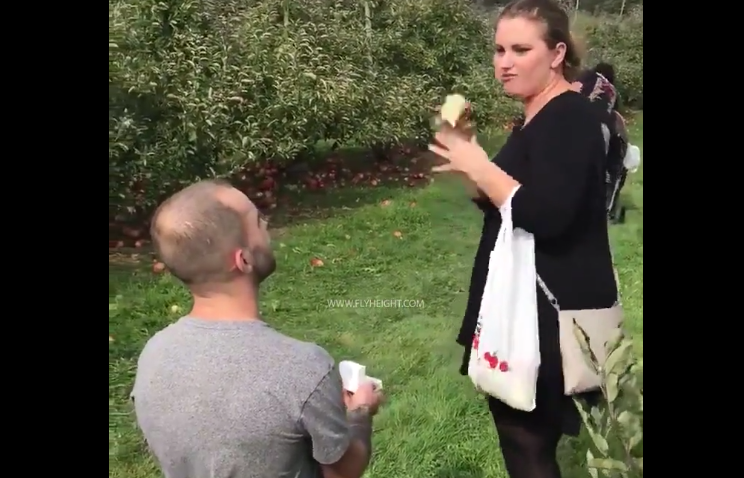 It wasn’t anything she said, really, it was the fact that her initial reaction to seeing her boyfriend on one knee was to throw a cupcake at him. She’s got good aim though, because she managed to bounce the delicious confection right off of his forehead. It took her a few seconds to realize that he was proposing in all seriousness, but when he did, she tackled her lover to the ground in a huge hug that is universally known as the sign for, “YES I WILL MARRY YOU!”

The couple was surrounded by friends and family to share their (mostly) happy moment.

Unfortunately, the ring was too small and needed to get sized to fit her finger, but that’s a common issue that is easily fixed at any jeweler.

I would like to think I would have a more gracious response to a proposal, but if I’m being totally honest, I would expect to do something like this. I would be in complete disbelief and would refuse to believe it was real until convinced otherwise.

Honestly, proposal stories make me so happy because the news is so full of negativity and hatred that it’s easy to get caught up in the nature of the media today. Seeing two people who are so in love that they want to sanctify their union in holy matrimony is heartwarming. The world needs more warm, fuzzy stories. Not that the rest of it isn’t important, but because we’re in such a spot right now that we need a spiritual pick-me-up worse than ever before.

We should all make an effort to share things with our social media friends that will just make them laugh and smile and forget (even temporarily) about the state of global and national politics. Happiness is becoming increasingly rare and we all need to do our part to maintain what little bit of sanity we have left. It’s getting harder, but I think we can do it.

You can start by sharing this story, if it strikes you.