Video: Whoever Thought You Could Toilet-Train a Cat?

One man, curious as to why his cat didn’t seem to be peeing in his litter box, decided to set up a hidden camera in the bathroom and let it run all night. He suspected the cat was using the human toilet to do his business[1], and it turns out, he was right! 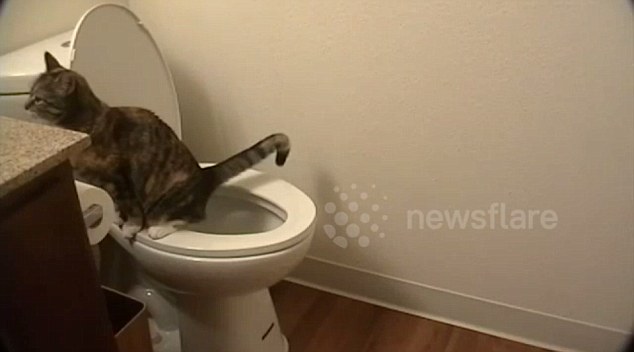 This is the bizarre moment that a man caught his cat nonchalantly using the toilet to take a leak.

The comical scene was caught on camera by the baffled owner from Marina, California, who said that someone in his household kept using the loo ‘but was not flushing it.’

So, he set up a secret camera overnight in a bid to catch the serial offender, but was not prepared for what he saw when the cat wandered into the frame.

Footage shows the cat walk up to the toilet bowl, look inside it, and then let out a loud meow.

Soon, the cat jumps up onto the seat – as though she’s done it many times before – and positions herself in the right spot.

She then straddles the seat with her paws on different spots and lets out a few more meows before she gets cold ‘paws,’ sniffs the toilet seat one last time and jumps down.

Feeling more comfortable, the cat then jumps back up onto the seat and perches on the edge of it.

With her bottom positioned over the toilet bowl, the sound of the cat using the facility to take a leak can be heard on the video, which was uploaded to Newsflare.com

The cat looks straight in front of itself, just like anyone else on the loo, as she spends a penny.

The footage is reminiscent of how Robert de Niro’s pampered cat Jinxy used an actual toilet instead of a litter box in the hilarious film Meet the Parents.

The one minute 48 second footage is sure to raise a few eyebrows at the cat’s purrfect ability to use the toilet like a human.

You can watch the humorous footage below:

Now if only he could teach himself to flush…