It’s safe to say that we’ve all received a hair cut that was… sub-par at best. The normal responses include complaining about it to your friends, asking your hairdresser to fix it, or wearing a ball cap until your hair grows out again. Abnormal responses include taking a sledgehammer and destroying the salon[1], as was the case of one Asian woman. 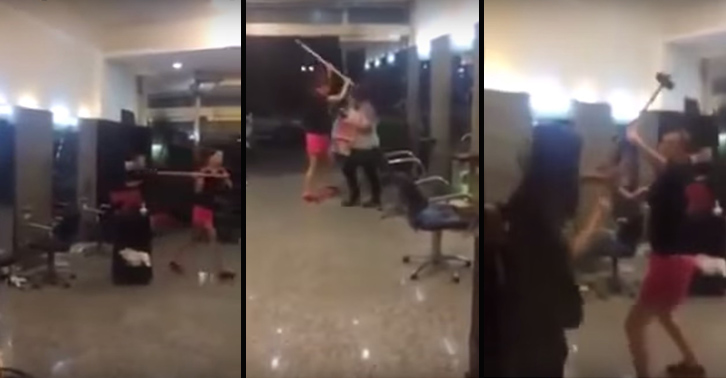 A woman in Southeast Asia was apparently pretty pissed off about her shitty haircut, and decided to redecorate the salon that gave it to her with her sledgehammer. As you do.

We’ve all had bad haircuts. Smiling and nodding as the hairdresser turns you into a deformed mass of mullet and sideburns. It’s the polite thing to do.

Apparently, this woman didn’t get the memo as she goes hell-for-leather in the salon that gave her the dodgy cut. She smashes mirrors and cabinets before turning on the staff of the salon and threatening them, presumably asking to have her hair glued back on.

The woman continues her rampage against the shop until the video cuts out, so we can only speculate as to the outcome of this situation. Hopefully they fashioned her some sort of crude wig from the floor cuttings as a peace offering.

You know, wigs are cheaper than what you’re going to to have to pay to fix everything you damaged. Also, it might benefit you in the future to invest in some anger management courses.