An infestation of spiders would have most people terrified and calling pest control to rid their home of the pests the second it was discovered. One person explains that they did, indeed, get their house fumigated after learning it was infested with black widows, but an interesting suggestion had them investigating a different method to deal with the infestation[1]. 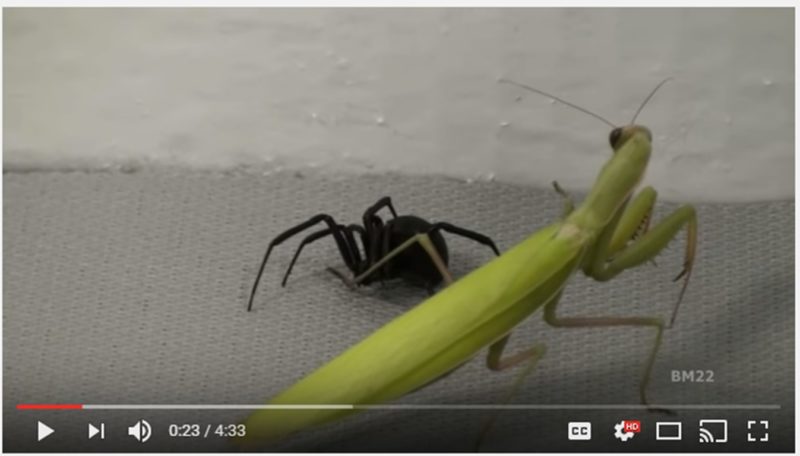 The user posted a video on YouTube of a praying mantis destroying a spider after commenters remarked that the insect could be used to get rid of the spiders. When he came back from a vacation in Hawaii, he discovered the infestation. The fumigation seemed to help, but he wasn’t sure if the spiders were still there or not. So commenters told him that he could use several natural predators: a praying mantis, birds or wasps.

So he decided to test the theory out. He caught one of the black widows crawling on his floor and put it into a box, where he also placed a praying mantis. So did the praying mantis kill the spider? The answer is no. The praying mantis did absolutely nothing while the spider crawled around the box.

The praying mantis is known to eat bugs like grasshoppers, crickets and spiders, although it didn’t seem to help much in this specific case. But there are also larger varieties of the mantids that can eat prey like bugs, frogs, lizards and even small birds.

The insects are certainly built to prey on other creatures. They have long necks with a triangular head they can turn 180 degrees around. They are also equipped with front legs that have rows of sharp spines, or teeth, to help them hold their prey while they eat them, usually head first. They also come in a variety of colors, from tan and brown to different shades of green, and their colors relate to their habitat, so they can easily blend in with their surroundings.

Would you try using a praying mantis if you had a spider infestation?