When kids go on sleepovers, it’s to be expected that they’ll do some kind of arts and crafts. A popular choice is homemade slime. But one mom was in for a horrific surprise when her daughter’s craft went terribly wrong[1]. 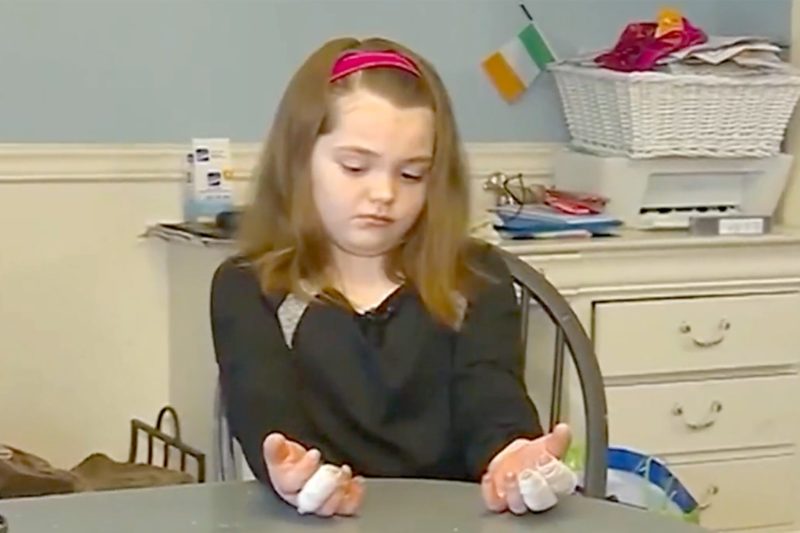 Kathleen Quinn is an eleven year-old girl who went on a sleepover where the kids made homemade slime. Fairly normal, right? Except when Kathleen went home, she told her mom that her hands hurt. So her mom took a look and what she saw was so awful that she immediately rushed her daughter to the hospital.

Kathleen had third-degree burns on her hands.

“I woke up in the middle of the night and my hands were just all wet and they were sticking together and they were blistered,” Kathleen said. The injuries to her hands were so bad that she has had to wear splints[3] and could even require surgery. Doctors confirms that “extended exposure to Borax” caused her burns.

Homemade slime is often made with borax, which in small amounts is not dangerous. It’s a common ingredient in homemade cleaners and laundry detergent. However, it’s essential that the borax is diluted in water before being used, especially if people will be touching it with their bare hands. That step was apparently skipped at Kathleen’s sleepover and her mom wants other parents to know about the risks of a seemingly harmless craft.

Worryingly, the homemade slime craze is evidently growing, with sales skyrocketing in the past six months. And this can be a problem if the ingredients are not used properly — Forbes noted that Borax can “dissolve the keratin layer of one’s skin, similar to how one’s hands feel slimy when working with bleach. If not washed off completely, the borax can then damage the underlying skin.” And Kathleen is not the only child who has been injured in this fashion; other children have received burns from making homemade slime with borax.