PETA is mostly useless, with their suggestive advertising and idiotic ventures like a “lobster empathy center”. But for once, they actually did something good: they helped bring Ashley Richards, 23, to prison for making disgusting videos where she tortured animals for people’s sexual pleasure. 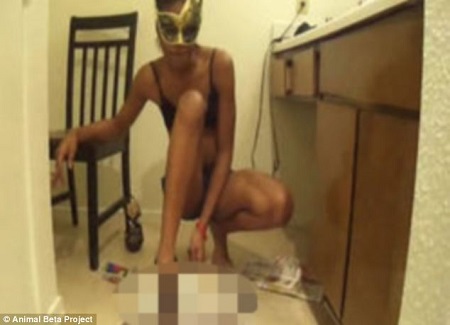 She created as many as 27 ‘crush’ videos between February 2010 and August 2012 and was eventually stopped after PETA discovered the footage and alerted the authorities.

After her arrest in 2012, prosecutors said she tortured a puppy, kittens, a rabbit, mice, a pigeon, fish, lobsters and crabs using high heeled shoes, a meat cleaver, knives, screwdrivers and pliers.

A graphic statement from PETA at the time revealed that she had often killed up to two animals a day, including a kitten who was bound with masking tape before being stomped on with a high heel that went into its eye.

Another video shows her using a meat cleaver to cut off a puppy’s leg, PETA said.

She allegedly filmed the videos with the help of Brent Justice, 52, who is also charged with animal cruelty.

They would then give the videos to people who were sexually aroused by the treatment, prosecutors said, the Houston Chronicle reported.

One of the most disturbing aspects of this case isn’t just the behavior of Richards — it’s that a federal judge dismissed some of the charges because they were a violation of her First Amendment rights. People have freedom of speech, but there absolutely is no right to torture innocent creatures on film. Thank God she’s been sent to prison, where she belongs.