This is a truly horrific story. The family of a now deceased police officer is being harassed by unknown, violent assailants and they don’t know why. Samantha Minehart was in her barn, talking to her horse when a man walked up behind her and put a knife to her throat. Despite the fact that she didn’t make any sudden moves, the man just started STABBING HER[1]. 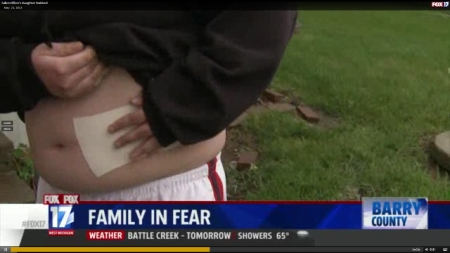 The daughter of a fallen police officer, Samantha Minehart, was tending to her horse in the family barn when a man walked up behind her, put a knife to her throat, and told her “not to do anything stupid”. Despite her compliance, the man started stabbing her, once in the stomach and once in the leg, resulting in the need for multiple stitches.

Minehart wasn’t taken totally by surprise though. Her family had been attacked on their land before, and she was ready. Minehart drew a gun that she was carrying for personal protection and fired two shots at the suspect, who then fled.

What’s the liberal suggestion for women in that suggestion? Oh yeah, don’t use a gun, urinate on yourself. Well, we can’t know whether that strategy would have been effective since Minehart shot at the man attacking her instead. On the other hand, the creep may have urinated in fear after she shot at him and she left him alone after that, so maybe it did work after all.

In all seriousness, this is a horrible situation. Two women isolated, being attacked for no reason, living in fear — how could any decent person want them to be disarmed and helpless?