There are few things on this earth more vile than someone who abuses a child. In LA, a mom went to care.com and researched nannies to take care of her children, including two one-year-old twins. She unfortunately found Dana Cash, who had a spotless record. The mom tried her out and she seemed to get along with the kids famously. Then her 8-year-old son told her what the nanny was really doing[1]. 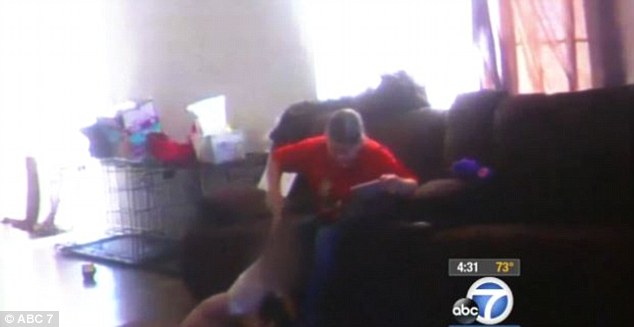 Snapped: The nanny soon became violent, dragging one of the kids along the floor in a fit of rage.

Dana Cash, 34, from Yucaipa, Los Angeles, California was hired as a nanny by a mother, who does not want to be named.

The mom said that she diligently checked her records and even gave her a trial run before she put her in charge of her kids.

She said: ‘She [Cash] was nice, we did a trial period, she was good with my older kids.’

But she was stunned when her eight-year-old son came and told her that he saw Cash abuse the twins, who were aged just one at the time.

After her son made the allegations, the mom decided to look back at video footage from her nanny camera to try and gather evidence.

She spent hours scrolling through the video to find evidence of abuse, and at first, the footage showed Cash being nice to the children, hugging the one-year-old boy and comforting him.

However, soon the video showed the nanny snap.

Cash was seen putting her hand over one of the twin’s mouths and shaking her violently.

Charges are now pending on suspicion of child abuse against Cash, but she is out on bail. After seeing the pics and footage, I don’t think there is much doubt this violent witch was abusing the twins. I hope that they throw the book at her, so she does not do this to any more innocent children, or God forbid, a child dies at her hands. It’s a good thing their big brother spoke up, since the little ones couldn’t. My only question is, if the mother had footage of this woman doing this, how come she wasn’t reviewing her nanny cam every day? I would.